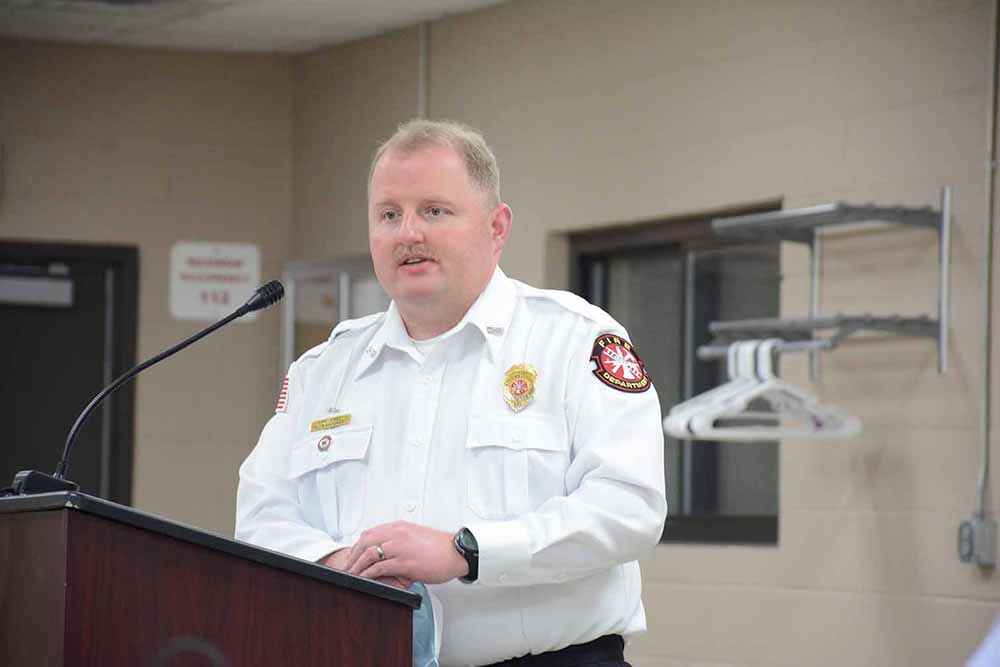 City Council members voted, 5-3, to extend a three-year contract offer to Rehder. Terms of the contract were not announced.

According to Rehder’s LinkedIn profile, he’s been city administrator in Seneca since 2013. Prior to that, he worked for seven years as planning director for El Dorado.

The Council’s  5-3 vote came at the conclusion of a 15-minute executive session, and caps a lengthy search process since Sid Fleming’s resignation in March. Council members agreed to terms of a contract with Garnett City Manager Christopher Weiner in August, but that offer fell through after Garnett City Commissioners agreed to rework his contract.

Prior to coming to Iola, Waggoner served as Girard fire chief for four years.

“I’m very lucky, in that normally when cities hire outside their agencies, it means you have a problem,” Waggoner told the Council. “I’m fortunate to be walking into a situation where you’ve had two back-to-back chiefs who were long-term and retired.”

“Really want to build on what we’ve got going here,” he continued. “I want to continue moving the department in the right direction, try to get some new equipment, fill a couple vacant positions and try to provide the best quality service I can.”

The Missouri native compared meeting him on the job to meeting an undertaker.

“Nobody wants to see me professionally, because it means you’ve had a pretty bad day,” he joked.

COUNCIL members approved a $28,400 contract amendment to Burns & McDonnell to have the engineering firm conduct a series of core sample studies along U.S. 54 through downtown Iola.

Burns & McDonnell already has studied the highway at length to determine the best type of project needed to keep the road in tip-top shape.

The core samples will give the city a clearer picture of whether the street requires a full-depth from State Street to the eastern city limits, or whether some areas will not require as much work.

A full-dept rebuild could cost as much as $13 million, engineers told the Council in November.

Along with the core study, which will be done in early 2021, Councilman Carl Slaugh encouraged his fellow Council members to look closer at the city’s capital improvement funds and strategic plans.

THE COUNCIL signed off on a request from USD 257 to have the city waive costs associated with moving a two-story house from south of the Bowlus Fine Arts Center to the corner of Jackson and Colborn streets.

Moving the house will require the city to temporarily remove the Buckeye-Madison traffic lights for up to three days, a handful of other streetlights and street signs.

The city’s costs — all of its in-kind labor — will total about $5,000, Interim City Administrator Corey Schinstock said.

The Council was eager to approve the request, noting the benefits of keeping the house in the city’s housing stock. (It had been slated for condemnation if it wasn’t being moved.)

Additionally, Iola High School’s building trades classes will be utilized to help do repairs to the structure so it can be resold.

— Approved year-end budget transfers for the city’s library, industrial and hospital improvement funds to finish off FY 2020. Monday’s meeting was the final one of the year.

— Approved a request from the Red Cross to continue allowing the organization access to the city’s community buildings in case  the organization needed to respond to a local natural disaster, such as a tornado.