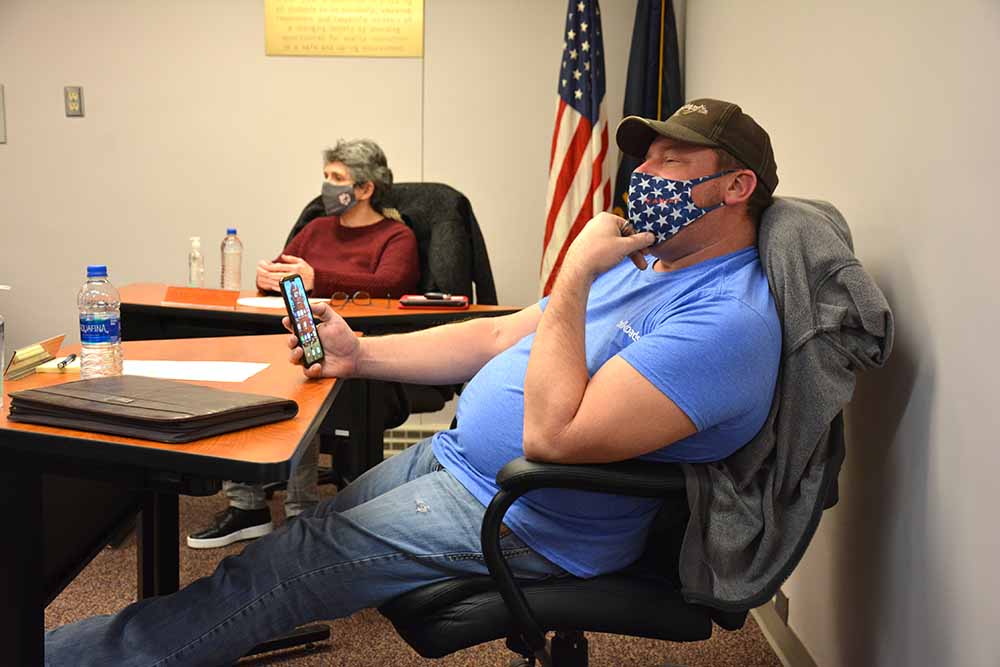 Columbus elementary principal will take the reins in Humboldt next year. The school board also discussed complaints from parents about coronavirus quarantines and how they impact student-athletes.

Kevin Heisler and Helen Harrington listen to a discussion on COVID-19 policy during a special meeting of the Humboldt school board. Photo by Trevor Hoag / Iola Register

Amber Wheeler will be the new superintendent for Humboldt schools.

The decision was announced at a special board of education meeting on Monday after a series of extensive interviews.

Wheeler is currently principal of the elementary school in Columbus, Kan., and before that taught third, fifth and sixth grades. She was also a math coach and she still loves teaching despite serving in administration.

She earned her bachelor’s, master’s and educational specialist degrees from Pittsburg State University, and completed her doctoral work at the University of Arkansas. She added that she never quite mastered the “hog call” at UA and said she prefers the phrase “Rock Chalk.”

“Quality” math is about really understanding operations deeply rather than mere rule-following, she said, and some examples of parental involvement include reading with students and developing evaluation methods that involve parental feedback.

Wheeler is excited about her new position, and will take the helm at USD 258 this summer, replacing outgoing superintendent Kay Lewis.

The Humboldt board of education also met for a special meeting on Wednesday to discuss COVID-19 policy and other matters.

The hot topic of the evening was COVID-19 quarantine efforts throughout the district, and it seems certain parents are not happy (and had been making their concerns known to board members).

Worth noting, is that the district has had in place the same quarantine procedure since the beginning of the pandemic.

Essentially what seems to have happened is that specific parents had become upset because their student-athlete children were getting denied the opportunity to participate in sporting events due to being (perhaps unnecessarily) quarantined.

(For instance, after a student-athlete had tested positive for COVID-19, their entire team was placed in quarantine. Students were also allegedly using the quarantine list in a malicious manner, claiming contact when none had been made.)

In response, no actions were taken to change quarantine policy at this time; however, board members and others each have action items so that a new strategy can potentially be put into place at the next regular board meeting in February.

The plan moving forward will include conferring with stakeholders as well as looking at other districts to compare policies, then potentially scaling back on certain COVID-19 measures.

Additionally, school nurse Wendy Froggatte said that it constituted a threat to her nursing license to continue spearheading contact tracing efforts for the district.

Board members were sympathetic to her concerns, and so decided to return contact tracing responsibilities to the Southeast Kansas Multi-County Health Department.

Unfortunately, there was also a concern raised by Froggatte and others that the Health Department had already not been adequately supporting the district’s current efforts, and therefore the additional concern had been raised, namely, as to whether the health department’s own efforts in the matter would be adequate.

Following a discussion with teacher Terry Meadows, the board expressed no objections to having a senior trip this year.

As for the shape the trip will take, though, it will be modified in multiple ways for safety’s sake.

The trip will involve no air travel, staying close to home by visiting either Kansas City or Branson.

And an lodging arrangement will be made in order to minimize contact with large groups or the public (such as a cabin).

Students will also continue to wear masks unless they’re in their own rooms.

The board decided to make a counter-offer on the building trades house that had been partially constructed by students.

Ultimately board members therefore decided to let superintendent Kay Lewis negotiate the price moving forward, seeking out a better return (or at least breaking even).