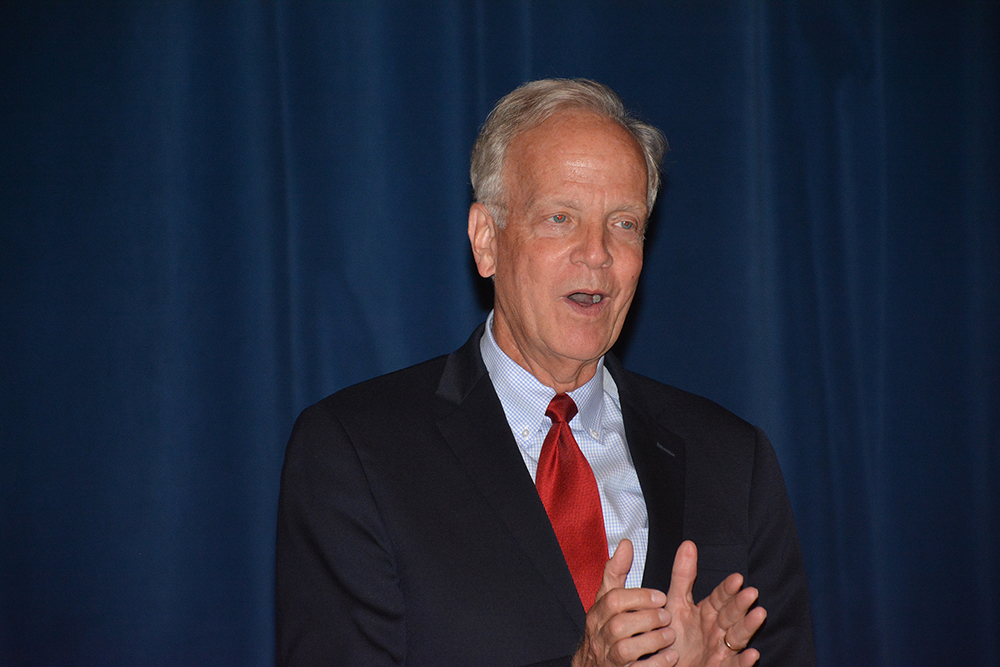 Sen. Jerry Moran was in Iola Thursday to speak with Rotarians about a host of issues, including jobs, infrastructure development and the ongoing COVID-19 pandemic.

Moran, a Republican, said he could see the measure as a good way of “putting people back to work and maybe it’s smarter to spend that money today to try to boost the economy by creating more jobs.”

About 30 million Americans are looking for work. Unemployment claims for this week were almost 1.5 million, the 12th consecutive week that claims have exceeded 1 million. The nation’s unemployment rate, now at 13.3%, has eased slightly since states began rolling back restrictions a few weeks ago.

House Democrats introduced the $1.5 trillion stimulus package last week, of which $300 billion would go to fix roads and bridges and another $100 billion for transit options.

Moran was especially favorable for its inclusion of $100 billion for broadband expansion.

Admitting neither big spending nor big government are in his DNA, the senator said “the challenges of the pandemic require both.”

Moran addressed Thursday’s gathering of the Iola Rotary Club. The meeting was held in the auditorium of the Bowlus Fine Arts Center in order to ensure proper social distancing.

All but a few of the 50 attendees wore face masks, including Moran.

For those who refuse to wear face masks, Moran had little patience.

“When someone tells me they are willing to take the risk of catching the virus by not wearing a mask, I’m here to remind them, we are not wearing masks to protect ourselves, but to protect others. The benefit accrues to those you come in contact with.”

“People have told me that if they die from the virus, it’s God’s will, but they are not going to wear a mask. I would say the freedoms we have as Americans come with responsibilities. We each should be doing everything we can to make our cities and towns as safe as possible.”

Such a projection is troublesome.

“We do not have enough government programs, or enough government money, to keep the economy going, to keep our country strong, in the absence of an economy that’s working. So moving people back to an economy that’s working is hugely important. But that can only happen if people take responsibility for their behaviors and conduct themselves in a way that does not spread the virus.”

US ill-prepared for pandemic

Moran said the United States was caught “flat-footed” in its ability to deal with the pandemic. “We were not prepared,” he said, adding that the virus has shown how heavily dependent the United States is on other countries to provide protective gear and prescription drugs.

“We ought not to rely on China or Honduras or anyone else to provide us with hospital gowns, masks, gloves and prescription drugs. Our supply chain needs to be closer to home,” he said.

Moran related the frustration of health care facilities in need of PPE, only to be told they were sitting on some loading dock on the West Coast. Another issue complicating the situation was that sometimes the equipment coming from overseas was of such quality that it did not meet federal standards and could not be used.

“That is not a situation we ever want to find ourselves in again,” he said.

The country’s lack of adequate technology in regards to education and healthcare has also been laid bare by the pandemic, he said.

“I’m a believer in rural Kansas. And I want to increase the chances that future generations will be able to thrive in communities like Iola,” he said.

To further that goal, rural communities need better access to healthcare and education services via broadband and other technologies.

“We learned with COVID-19 that we are woefully inadequate in providing broadband services to many sectors across the country, including those in Kansas,” he said.

Telehealth — doctors and mental health providers communicating via the internet — is critical to our wellbeing, he said.

In regards to education, Moran said, “I’m not convinced that all students are able to get the education they need” with distance learning.

When schools were shuttered during the pandemic, it created many hardships.

“I know of students who were trying to learn but instead were saddled with the responsibility of caring for their younger siblings while their parents are away at work. We need students to be back in the classroom,” he said.

Moran is hopeful the country is on track to avoiding a resurgence in cases this fall. “We need to be doing everything we can to increase the chances that our schools can open,” he said.

While heavily populated states such as New York, Florida, Texas and California are being overwhelmed by the pandemic, Moran says Kansas is at somewhat an advantage, “which we always believe, but perhaps the rest of the country doesn’t.”

“The isolation that people sometimes complain about — so far away, so far removed, not enough people, not enough things to do — has been a positive factor. And it’s a selling feature we need to use to recruit and encourage more manufacturing, especially that related to healthcare, to locate here.”

Moran said that he has been working with Iola native David Toland, now Kansas Secretary of Commerce, to work toward such ends.

When asked by Iolan John McRae about the social unrest the country is experiencing, Moran said, “I believe it’s a consensus of all Americans that George Floyd did not receive the treatment he deserved. It was wrong.”

As for national reforms of the country’s law enforcement system, Moran admitted the need to address racial inequality, but deferred from endorsing any concrete measure other than to encourage police departments “to behave in ways that exhibit the conduct that we all want.”

He hinted that “outside forces, the Russians, are trying to tear us apart through social media.”

Moran’s answer to the discord is for Americans to take responsibility for their thoughts and deeds.

“I think we overemphasize politics in thinking that it is the savior of our world. I’m of the belief that we spend too little time on the heart, and overemphasize how much we can change the world at the ballot box. While public service and policy are important, that’s not what we need right now, and yet that’s what everybody is focusing on.”