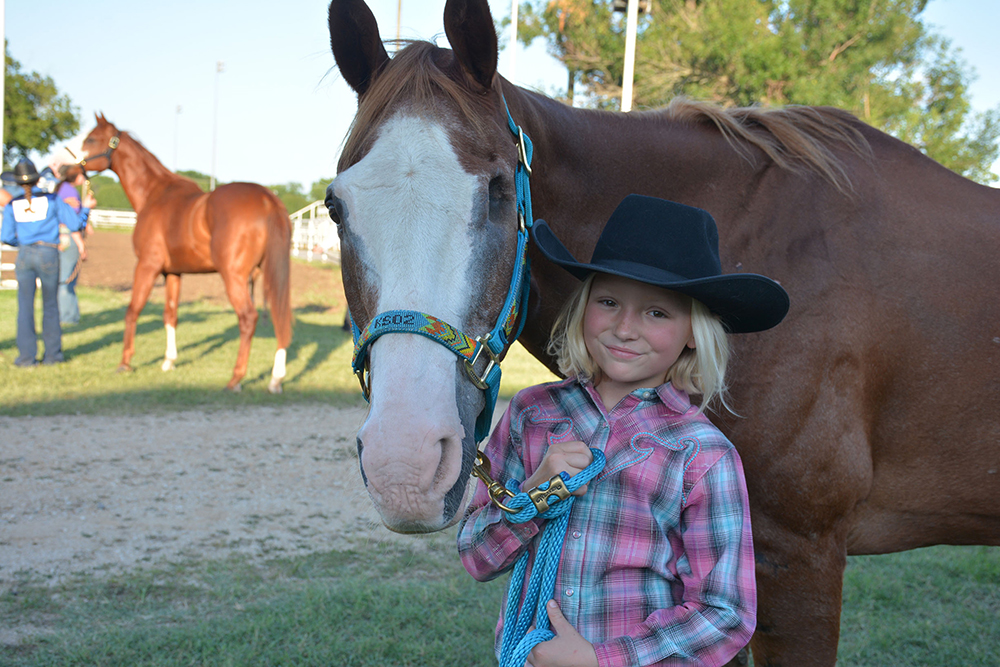 Ruthie Jones had an experienced partner Wednesday at the County Fair Horse Show. Cowboy, a 28-year-old horse, lost an eye to infection several years ago.

Cowboy, a one-eyed rodeo veteran, returned to the arena this summer with Ruthie Jones, age 9, Moran. Ruthie is new to riding, and her aunt, Nikki Sprague, said she trusts Cowboy to take care of his riders. Photo by Vickie Moss / Iola Register

Cowboy put his trust into his rider as he turned left around the first barrel in the Allen County Arena Wednesday evening.

The horse is missing his left eye and can’t see anything on that side. Years of muscle memory and the cues from his rider, 9-year-old Ruthie Jones, guided him around the barrel.

He felt the pressure of her thighs, the heel of her boot in his side, the reins against his neck.

They rounded the first barrel and completed the cloverleaf pattern around two more. These were right turns, and he saw them coming.

Cowboy and Ruthie trotted through the dirt toward the finish line. He’s a former racehorse, and even at the elderly age of 28, he can go fast.

Ruthie, though, took it easy. She’s only competed in a couple of barrel races, and she’s still a little afraid.

Juliana Sprague rides one of her horses, Izzy, at the Fair. Juliana will be part of the rodeo team at Fort Scott Community College this fall. Photo by Vickie Moss

Ruthie Jones warms up with Cowboy before the performance competitions at the Allen County Fair Wednesday. Photo by Vickie Moss / Iola Register

A young Juliana Sprague, now 18, competes in barrel racing with Cowboy not long after he returned to the rodeo circuit after losing his left eye. Courtesy photo
3 photos

JULIANA SPRAGUE, age 18, watched the run from the sidelines. Ten years ago, she was in Ruthie’s seat.

Cowboy was her competition horse, and she ran barrel races in this very arena as well as in rodeos across the region.

Cowboy had both eyes during rodeo competitions their first year, but not for long. Juliana and the gelding were still developing their sacred bond of trust when an infection settled into his left eye about a year and half after her family bought him.

They think perhaps he was poked in an eye by a stick during a trail ride. What started as a blue dot in his eye became an ugly, painful infection. The eye was removed after numerous visits to local veterinarians and experts at Kansas State University.

The family was advised to never compete with Cowboy again. A horse’s eyes are set far apart, on opposite sides of his head, and a half-blind horse can’t be trusted, the vets said. A fall could be tragic for both horse and rider.

But the family was invested in Cowboy, especially with the vet bills. They couldn’t afford another competition horse of his caliber.

“I didn’t know what was going to happen but I didn’t have much choice,” Juliana said. “We started very slow, figuring out what worked and what didn’t.”

Juliana borrowed horses from friends to compete that year, and slowly began to work with Cowboy.

At first, Juliana trained him to go the opposite way, starting with a left turn, but he has a muscle deficiency on his right side. It’s fine if he goes slow, like with Ruthie, but he couldn’t compete that way. Juliana kept him to the usual pattern: right turn, then two left.

He had to learn to trust Juliana to guide him through the two blind left turns.

He also had to be retrained for pole bending, learning how to run around poles on his right side rather than to his left.

“At first he was very spooky,” she said. “There were a few times when we’d head for a barrel and he’d turn and run along the fence.”

COWBOY, a well-bred registered Quarter horse, started his career on the racing circuit in Iowa.

The career of a race horse is typically a short one, just one or two seasons at the ages of 2 or 3.

But Cowboy was a veteran, retiring from the track after about eight years.

He was retrained for performance competitions like barrels and pole bending.

The Sprague family bought Cowboy from a teenage girl who adored and spoiled him. They stayed in touch with her through the infection, crying on the phone as they shared the news that his eye would need to be removed.

Cowboy wasn’t Juliana’s first horse, but he taught her a lot about riding and competitions. And, especially, about trust.

“He’s a best friend,” she said with a tender smile. “He’s been a pretty good boy.”

She remembers how he liked to challenge her in the beginning, before he lost his eye. She was little, around 8, even younger than Ruthie is now, when they brought him home. He’d raise his head out of reach when she tried to put a bridle on him.

Even after he lost his eye, Cowboy and Juliana would go on to win trophies and awards at rodeos and events across the region. She won a saddle with him in 2011, which was quite an accomplishment.

After three years, Juliana graduated to the challenge of a new horse. Her younger sister, Shelby, had her own horse and didn’t need Cowboy. The gelding was sent to live with a family member in western Kansas for two years, where he taught at least four other children to ride and compete in barrel racing.

In the fall, Juliana will take two horses with her to Fort Scott Community College, where she’ll be part of the rodeo team. She’ll compete with a new horse, Famous Showtime, and has another mare, Izzy, as a backup.

She expected Cowboy would take things easy for the remainder of his life. The average lifespan for a horse is around 30 years.

It turned out, though, that Cowboy’s competition days weren’t quite over.

RUTHIE came to live with Joe and Nikki Sprague’s family in the Moran area about a year ago. Nikki is her aunt.

She grew up in Hawaii and had never been around livestock or farm animals until she moved to Kansas. She just started riding this summer.

She was a little intimidated by Cowboy at first.

Of all the horses her aunt could give her to ride, why did it have to be the old, one-eyed Cowboy?

Of all horses, though, Cowboy is the one Nikki trusted most.

“Cowboy has always taken care of his rider,” Nikki said “Even while being competitive, and even though he has a lot of get-up and go, he’s always been trustworthy.”

Nikki insisted Ruthie develop a relationship with the horse. Ruthie was in charge of feeding him, brushing him, cleaning up after him. They bonded, and the girl’s fears subsided.

At Wednesday’s 4-H Horse Show, Ruthie brought home a purple ribbon on the pole run, and blue ribbons in barrels and flag racing, along with other ribbons.

“I just like being around horses,” Ruthie said. “They make me feel good.”

There’s a beautiful synergy in the relationships Cowboy has formed with both Juliana and Ruthie, Nikki believes.

“Kids handle adversity pretty well,” she said. “Something terrible can happen, and you can persevere. Juliana and Cowboy learned to put their trust in each other. Ruthie learned you don’t have to be perfect to find your place.”