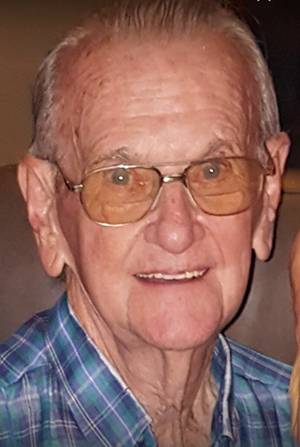 Bob served in the United States Army from 1951 to 1953. He was a member of the Iola American Legion and Elks.

Bob enjoyed fishing, hunting, playing cards, and gardening, along with being an avid coin collector. He loved feeding the squirrels in his yard and had the patience and perseverance that wild squirrels would eat out of his hand. He was a lifelong Kansas City Chiefs fan and was in attendance for their only Super Bowl win (thus far) in New Orleans in 1970. Bobs grandchildren and great-grandchildren brought him great joy.

Bob was preceded in death by his wife, Pauline; his parents; his sister, Corinne Allhiser, and son-in-law, Keith Hedden.

Memorials are suggested to the Allen County Animal Rescue Facility (ACARF), and may be left with Feuerborn Family Funeral Service, Iola.