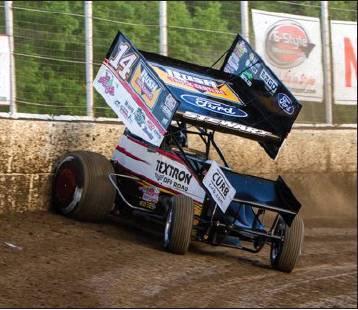 HUMBOLDT  Picking up his first victory of the season with the Lucas Oil American Sprint Car Series presented by Sawblade.com, Wayne Johnson got a win in the series debut at the Humboldt Speedway on Wednesday night, making it seven events with just as many winners so far in 2018.

Leading all 25 laps at the Kansas bullring, the win is Johnsons 51st overall and second in the state of Kansas with the National Tour. Waynes last trip to Victory Lane came on July 4, 2008, at Lakeside Speedway where the series will race tonight. The win also brought Johnson within a single point of the Lucas Oil American Sprint Car Series points lead.

First off, I have to thank Vern and Slippy. They worked their butts off on this thing. Verns just here for a little bit trying to help get me lined out, but our short track program is really good right now, commented Johnson. Last year we came here for a Regional show and we stunk up the place, so we just threw something at this thing and it worked. We have Lakeside tomorrow, so well see if we can get our big track program rolling there.