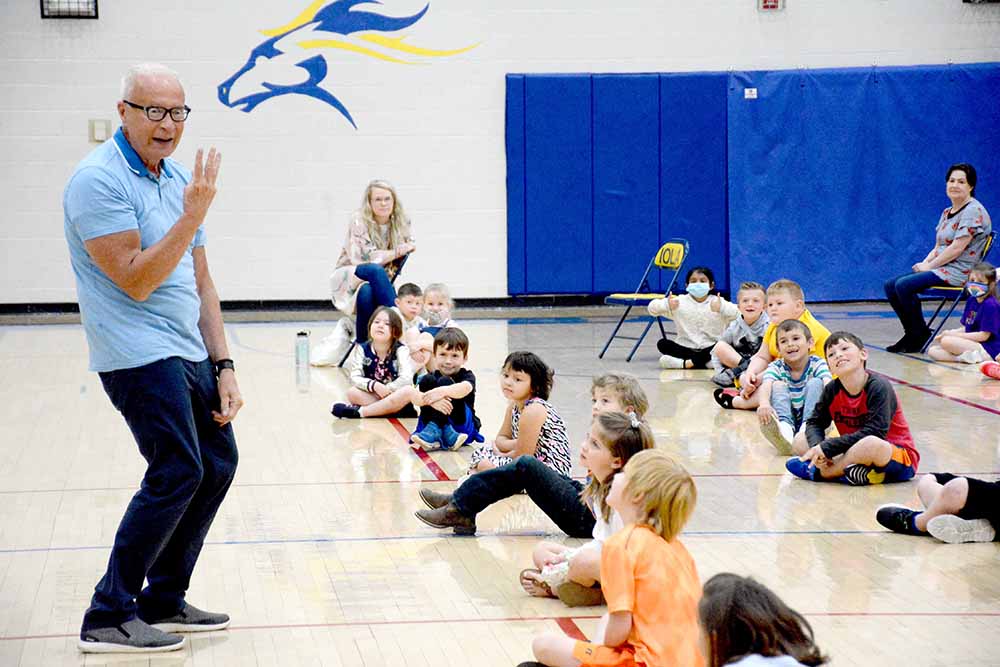 Area students had to wait more than a year to gather together to hear author and illustrator Henry Cole. When it finally happened, the students were on their best behavior and excited to learn about his craft.

Author/illustrator Henry Cole speaks to first and second graders from Jefferson Elementary School. The program took place at Iola High School, which gave students a chance to spread out for COVID-19 protocols. It was the first all-school gathering since the pandemic began. Photo by Vickie Moss / Iola Register

First- and second-graders from Jefferson Elementary School sat in rapt attention when Henry Cole, famed author and illustrator, shared with the students his love affair with drawing.

“This is the best birthday present I ever received, my very first drawing pad,” Cole said, holding a notepad aloft. “I love it.”

Then, he kissed it.

The children burst into laughter.

“And my very first pencil case. With pencils.”

He then dramatically kissed a pencil. The gym erupted with joy.

For the first time in more than a year, the entire student bodies of area schools gathered Monday for the Author Visit program.

Cole had planned to visit Iola last year, but the pandemic canceled the event. Even his scheduled visit for a few weeks ago was canceled because of inclement weather.

Finally, Cole made it to Iola. He was scheduled to give seven presentations at various locations around Allen, Anderson and Woodson counties on Monday and today.

At the Jefferson presentation, it was clear the students appreciated the significance of Cole’s visit.

“These kids are so polite and so well behaved,” Cole said after his presentation. “I’m in awe of them. They were wonderful.”

Indeed, the students were on their best behavior. All eyes were glued to Cole, with very little fidgeting. They were silent when he spoke, rose their hands politely when asked, and eagerly responded when called upon.

He played music as he drew, and the students danced in place.

All it takes to draw a picture is a piece of paper and a pencil. Or a broken crayon.

“You don’t need fancy things to be an illustrator,” he told them.

Cole has visited Iola several times “and it’s always a treat,” he said. “The world’s nicest people. I love coming back here.”

Cole said he hopes he might have encouraged students to write and draw more, and perhaps they would see how it might be possible to build a career in the arts.

“I think a lot of people, if they can find a career that really speaks to them, they’re lucky people,” he said. “Enjoy what you do and then you can do what you enjoy.”

Students asked Cole how many books he’d published. He helped them count by tens, up to 160.