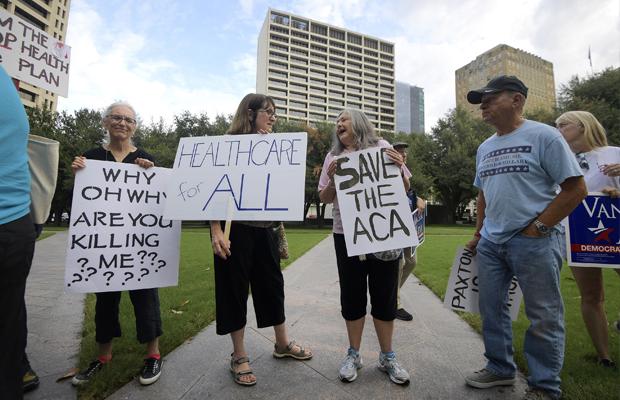 FORT WORTH, Texas  A federal judge in Texas on Wednesday rejected a request from a group of Republican-led states to suspend the Affordable Care Act, but he extensively quizzed attorneys involved in the latest challenge to the 2010 health care law about which provisions should survive.
That raised the prospect that U.S. District Judge Reed OConnor, a conservative appointed by President George W. Bush, may seek to roll back at least some of the consumer protections at the core of the law, often called Obamacare.
At the same time, by signaling he would issue a ruling soon, OConnor assured that the lawsuit  Texas v. Azar  and its attempt to wipe out the 2010 law would continue to shadow political campaigns ahead of this Novembers midterm congressional elections.
The foundation of the lawsuit brought by 20 mostly conservative-leaning states, led by Texas and Wisconsin, is a provision in last years mammoth tax bill that eliminated the penalty on Americans who dont have health insurance, but still preserved the technical requirement that people have coverage.
The requirement and the penalty were once considered integral parts of the health care law. Insurers, state regulators and other experts believed that unless there was a penalty for going uninsured, younger and healthier people would not buy health plans until they got sick, leading insurance markets to collapse.
The penalty was also critical to the health care laws survival when it first came before the Supreme Court in 2012 in a lawsuit that alleged the laws insurance requirement was unconstitutional.
Chief Justice John G. Roberts Jr. joined the courts four liberal justices to uphold the law, but only after concluding that the requirement could stand because it was enforced with a tax penalty.
Now in the Texas case, the 20 governors and attorneys general argue the requirement is no longer constitutional because the tax penalty has been eliminated.
And, they continue, because the requirement is so central to health care law, the whole law cannot survive without it.
The entire ACA should fall, Wisconsin Solicitor General Misha Tseytlin told the judge Wednesday in a federal courtroom in Fort Worth, Texas.
Tseytlin and an attorney for the state of Texas further urged OConnor to immediately enjoin the law, arguing that it is causing widespread damage to states and undermining their authority to regulate health insurance.
OConnor did not issue a preliminary injunction, which even the Trump administration had opposed, even though it supports some elements of the Republican states case.
OConnor appeared most interested in whether at least some parts of the law should be invalidated if the insurance mandate is deemed unconstitutional because it is no longer a tax.
During the hearing, OConnor returned repeatedly to arguments that architects of the health care law made in 2010 and afterward that requiring people to have insurance was critical to the popular consumer protections in the law, including bans on insurance companies turning away sick customers or charging them higher premiums, practices that were commonplace before the health care law was enacted.
OConnor noted that the Supreme Court had relied on those arguments both times the health care law came before the court.
Every single justice … looked at this, OConnor said.
At another point, he asked if the Obama administration had been wrong to argue that the mandate was essential to the consumer protections.
The Trump administration earlier this year elected not to defend the law, an unusual departure from the Justice Departments traditional responsibility to safeguard federal law.
But attorneys for the state of California  which has joined with 15 Democratic-led states and the District of Columbia to defend the Affordable Care Act  urged OConnor to instead focus on the intent of the lawmakers who wrote the 2017 tax law.
Those lawmakers chose to eliminate only the tax penalty, while preserving protections for Americans with preexisting medical conditions, noted California Deputy Attorney General Nimrod Elias.
Congress wished to leave this law in place, Elias said, quoting several senior Republican lawmakers who said during debate over the tax law that they did not want to eliminate patient protections. That should be the guidepost, Elias said.
The consumer protections are among the most popular parts of the health care law, with three-quarters of Americans in one recent nationwide poll saying they believe it is very important to preserve the guarantee that people who are sick can get coverage.
If successful, however, the Texas suit would also eliminate hundreds of billions of dollars in federal assistance that has made it possible to extend coverage to some 20 million previously uninsured Americans through expansions to state Medicaid programs and through subsidies available to low- and middle-income Americans who buy coverage on insurance marketplaces around the country.
Scores of patient advocates, physicians and hospital groups and other health care experts have warned that such a retrenchment would be catastrophic.
Invalidating the guaranteed-issue and community rating provisions  or the entire ACA  would have a devastating impact on doctors, patients and the American health care system as a whole, noted a coalition of physician groups that included the American Medical Association, the American Academy of Family Physicians, the American College of Physicians and the American Academy of Pediatrics.
Also opposing the lawsuit are leading national groups representing patients, including the American Diabetes Association, the American Lung Association, the American Heart Association, the National Multiple Sclerosis Society and the advocacy arm of the American Cancer Society.