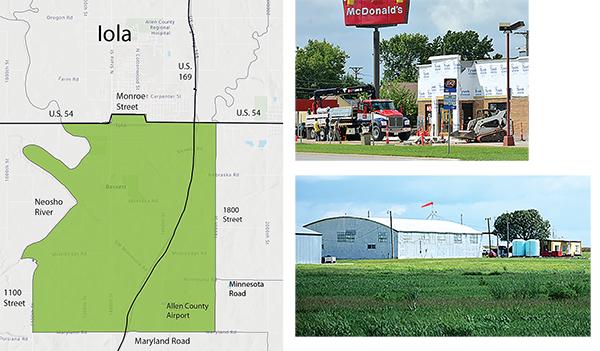 Land in or near South Iola could see new development now that the area has been designated an Opportunity Zone by the Kansas Department of Commerce.
The area stretches from U.S. 54 to the Allen County Airport, and includes all of downtown Iola, and is one of 74 such Opportunity Zones nominated by Gov. Jeff Colyer earlier this year.
The program, made possible by federal tax legislation signed into law in 2017, is earmarked for areas of high poverty.
The South Iola tract is considered in severe distress, with more than 28 percent of the residents living there considered in poverty, according to U.S. Census figures.
To be eligible for submission, tracts must meet certain population thresholds and have a poverty rate of at least 20 percent.
The goal is to spark economic development by offering investors breaks on capital gains taxes, explained Bill Maness, economic development director for Thrive Allen County. (A capital gain is any profit made by the sale of property or stock.)
Investors are allowed to defer taxes on any capital gains by either investing in development in a designated zone, or by donating into a similar Opportunity Fund to pay for future projects.
The length of the investment determines how much of the tax is deferred. If an investor keeps his money in the project at least 10 years, all of the tax is deferred, Maness said.
Even better, investors are not required to live in the Opportunity Zones to participate.
Maness received word of Iola and Allen Countys Opportunity Zone designation in late July.
Were trying to get word around so local people start talking to others who may have capital gains and are looking to invest, Maness said.
Any taxpayer is automatically eligible to take part.
Maness stressed the zone, which includes all of the property around Iolas downtown square, also extends beyond Iolas city limits, and includes all of the Lehigh quarry land, Gates Corporation and much of the area near the airport.
Anything from upgrading equipment or facilities, building anew or developing housing would fit. Anything dealing with economic development, Maness said.
Officially, the Opportunity Zone borders Maryland Road to the south, 1800 Street to the east, U.S. 54 to the north, except from Davis to Elm, where it juts north to Monroe Street, and the Neosho River and 1100 Street to the west.
Only 25 percent of the qualifying Census tracts were selected as Opportunity Zones, Maness noted. Maness filed a request to the governors office on Allen Countys behalf in March.
Of note, there were no such Opportunity Zone designations in Neosho, Woodson, Bourbon,  Coffey, Wilson or Linn counties, while the northeast quadrant of Anderson County qualified.
Eighteen states have been selected to take part.