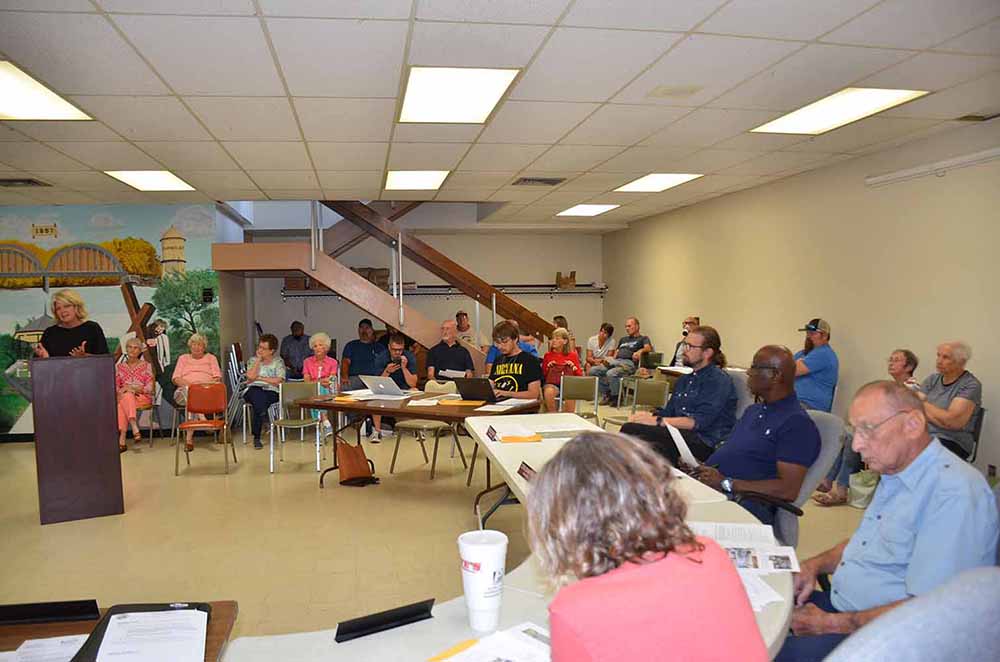 About 15 local citizens attended the Humboldt City Council meeting to oppose plans to allow Sunday alcohol sales to begin at 9 a.m. rather than noon. Pastors argued the need to 'remember the Sabbath and keep it holy.'

A large crowd attended the July 12 meeting of Humboldt City Council. Many were there to speak against Sunday morning sales of packaged alcohol. Photo by Susan Lynn / Iola Register

HUMBOLDT — Possibly realizing they were up against powerful forces, Humboldt Council members changed their tune Monday evening and decided not to pursue Sunday morning sales of alcohol.

About 15 local citizens attended the meeting specifically to oppose the city changing its ordinance to allow sales to begin at 9 a.m., rather than at noon.

At their June 14 meeting, council members seemed inclined to approve the request after hearing appeals from Dan Onnen of Freedom Liquor Store and Suzanne Whitcomb of Pete’s Convenience.

“We can’t ask people to spend money in Humboldt unless we give them the option to do so,” said Mayor Nobby Davis at the time.

During the intervening month, however, it seems the idea has festered with some. At Monday’s meeting several letters and a petition with 63 signatures opposing the ordinance were presented.

“A lot of communities, not just Humboldt, but in general, are forgetting to remember the Sabbath and keep it holy,” Neely said. “Three hours might seem trivial, but selling alcohol while churches are holding services seems offensive.

“This is Humboldt, the home of Biblesta, a celebration intended to highlight God and our country,” Neely said.

Pastor Carter said he was not opposed to the business of selling alcohol, but, like Neely, to “breaking the Sabbath.”

Carter suggested that the break in sales on Sunday mornings can serve as a “sobering time” for those “struggling with alcohol,” whom he says he is in close contact through his role as a minister.

“We need to remember what Sunday is for. We don’t want that time to be influenced when we should be worshiping God with all of our heart,” Carter said.

Heape said that over his lifetime he has witnessed “gradual steps” of moral decline, including the use of drugs, alcohol and tobacco.

“Just one little step at a time, we are making this country worse,” he said.

No one spoke in favor of the ordinance.

Council members let the matter die by not taking any formal action, which could have brought it to a public vote in the general election.

During his discussion on the matter, City Administrator Cole Herder said he wanted to make clear that the city does not receive any revenue from the sale of alcohol, but only from non-alcoholic items sold in liquor stores and the property taxes they pay.

Herder justified the increase by saying “that if there’s a reduction in taxes, or something bad happens that requires more money, then we would be better off.”

A hearing on the increase will be in August and take effect in September.

Herder went into detail about how taxing entities are adjusting to a new law in determining their budgets by using what is called the revenue neutral rate according to their mill levies.

BRUCE Boettcher of BG Consultants, Emporia, updated council on the financing options for the $11 million water line and mains upgrade the city needs.

Boettcher said a U.S. Department of Agriculture loan is “looking very favorable,” which would allow the city to complete the work in one fell swoop, approximately two years.

Otherwise, it likely will be completed in three stages, requiring triple the paperwork and time.

“A town can get worn out if you have multiple phases of a large project,” he said. Plus, interest rates are still rock-bottom.

Even so, Boettcher is covering all bases if the full USDA loan doesn’t come to pass, by applying for a Community Development Block Grant loan in lesser amounts over a longer period of time. By fall, the city should know how the approximate $11,095,000 project will be funded.

Beth Barlow was granted permission to park a pop-up pickup truck on the square during “random Saturdays,” over the course of the year. Barlow envisions the truck as an entry into a retail space for local entrepreneurs to sell their goods. “It’s also a great way to show the world that fun things are happening in Humboldt,” she said.

Amber Bonczkowski and her brother, James Reed, were granted permission to hold a car show/corn hole fundraiser on Oct. 16 to benefit their father, John Reed, who is facing unwieldy medical expenses. John Reed suffers from six tick-borne infections, including Lyme disease. Because his diagnosis was not determined until in the advanced stages, there is no FDA-approved treatment, Bonczkowski said. Health insurance, therefore, typically does not pay for his treatment.

Marilyn Davis appealed to the council to drill more holes in the new city sidewalks for flags. “We love our new sidewalks. We appreciate them. But there are a number of places that have not been drilled for flags,” she said. Davis spoke for the Humboldt Historical Alliance.

Council renewed their seven-year agreement with Kenny Schettler of JKS Sanitation, Erie, to collect garbage, beginning January 2022. Fees would increase from $9.75 to $10.75 a month for residential customers and from $14 to $15.25 for commercial. During the previous seven years, Schettler never asked for an increase in fees, council members noted.

The city hired Higher Calling Technologies of Parsons as its information technology provider.

A committee was appointed to study the city’s policy of allowing golf carts on city streets. Several members said they were uneasy seeing unrestrained children riding in the carts.

Sergeant Mike Roney was introduced to the council as a new member of the Humboldt Police Force.