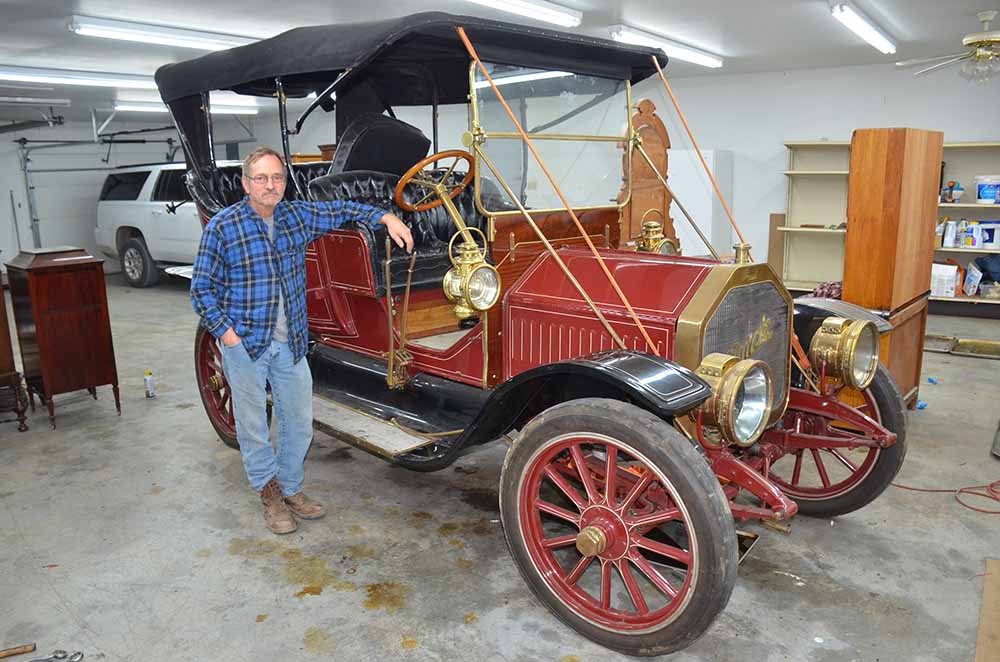 Mark Freimiller will auction scores of antique cars, parts and equipment and close Model T Haven before he retires and moves to Florida. Hundreds of bidders are expected to be on hand for the auction Tuesday and Wednesday.

Mark Freimiller stands near a 1910 Buick, one of the hundreds of antique automobiles he’s had a hand in restoring at Model T Haven, which is closing upon his retirement. Photo by Richard Luken / Iola Register

Mark Freimiller isn’t one to brag.

But it’s not hyperbole to say he has become an icon among car collectors and dealers near and far through his Model T Haven.

Freimiller began his business 28 years ago with a modest salvage yard south of Gas.

He’s learning just how much of an impact his business has made, not just in Kansas, but across the United States and beyond.

“I didn’t know it had grown to take on a status of whatever you want to call it,” Freimiller said this week.

That has come to an end.

On Tuesday, Freimiller will auction off nearly all of the scores of antique cars — most dating back to the earliest Model T Fords and their ilk — and acres of parts and equipment as Model T Haven closes its doors for good.

He and wife Mary are retiring and headed to Florida, to live nearer family, and to set roots in a warmer climate, better suited for his wife’s ailing health.

The auction promises to be a spectacle in and of itself.

Local hotels have been booked up for weeks in Iola and beyond as hundreds of buyers will come to town with the hopes of claiming their share of automotive history.

Freimiller estimates hundreds of bidders  — and perhaps as many curious onlookers  — will be on hand when the bidding starts at 11 a.m. Tuesday. There’s so much to sell, the auction will stop at dusk and pick up at 9 a.m. Wednesday.

There’s still plenty to do between now and sale time as Freimiller sorts through his collections, 30 years in the making.

And he does so with more than a little tinge of heartbreak. Model T Haven, he notes, is as much a part of him as his right arm.

“It’s gonna cut my heart out to leave here,” he said. “I love it here. The people here are fantastic. There’s nothing bad I can say about Iola, Kansas.”

FREIMILLER grew up in Pennsylvania, and moved to southeast Kansas in 1990, when he took a job as plant manager at P.C. Boards in Chanute.

But just as soon as he had grown comfortable with his new environs, disaster struck. The plant closed its doors.

Freimiller, with three young children, was out of a job.

So he turned to what he knew best: tinkering with old cars.

“When I started, I started out of desperation,” he said.

So desperate that Freimiller started his business a little too early.

See, salvage lots are closely monitored by the state for myriad reasons, not the least of which is to ensure the dealer is reputable.

Freimiller had none of that. No licenses or permits. Just a growing pile of car bodies and parts accumulating in his back yard.

When he realized he was going to try to make a go of it as Model T Haven, Freimiller was a bit nervous when he went to the courthouse to get his proper licensing.

But something funny happened when he entered the doors.

The county didn’t shut down his fledgling business. He wasn’t lectured, or scorned.

“There was no fight,” he said. “There was no, ‘You can’t do that, or you can’t do this.’ I showed them I was improving my property, and keeping it neat, and trying to do the responsible thing. They just said ‘here you go, here’s your license.’”

“All they did was help me,” he continued. “In Iola, they will bend over backwards to help you.”

And it wasn’t a novelty, as he saw repeatedly through the years.

In a political climate where many consider government the enemy of small business, Freimiller holds the opposite view.

“When it comes to the state of Kansas, and the people at the courthouse, they are stellar, the most helpful, kind people you’d ever want to deal with,” Freimiller said. “That’s why my business has thrived like it has.”

It turns out having a keen knowledge of automotive history helped, too.

That stemmed from his boyhood passion — cars — and a unique taste in which cars he found appealing.

While others clamored for Mustangs or Camaros, Freimiller went a bit older-school. His first car, in fact, was a 1949 Chevy.

Rather, he would take an old, inoperable, mostly junked car, then fix it up enough to catch the eye of someone capable of restoring it to its original beauty.

“I just started buying and selling, and it grew and it grew,” he noted.

The advent of the internet played a significant role in his growth.

Soon, he was doing business worldwide. Parts went to China, England, the Netherlands.

Even this week he was loading a trailer of parts bound for China.

Freimiller also honed another skill integral to auto dealers: he was honest.

“As long as you’re honest with people, you develop  a reputation that you take care of people,” he said. “Everybody makes mistakes. But if you make a mistake,  just make it right. That’s all. If it costs you, so what? In the long run, It doesn’t cost you.”

There’s another funny thing about running a business centered on restoring old cars.

In recent times when the economy went sour — the 2008 housing market collapse, and the more recent COVID-19 pandemic — Model T Haven was busier than ever.

Freimiller suspects he knows why.

“What do you do when you’re sitting at home?” he asked. “You work on your car. When the economy crashed, we went through the roof.”

FREIMILLER is not yet sure where they’ll settle in Florida. He and Mary will stay with relatives until they find a permanent home.

Their move was expedited a bit because their home and property already have sold. The deal to close on the property is set for next week.

He may start a similar Model T Haven-esque business there, but on a substantially smaller scale.

“We’ll see how things shake out,” he said

He’ll miss Iola’s friendliness most of all.

“Iola is my family, if that makes any sense,” he said, counting the hundreds of times he walked in the doors of Iola Auto Parts or J-D’s Tire and Muffler, and was treated more like family than as a customer.

“You build trust among the people in a small community that you can’t get anywhere else,” he said. “If you live in a city, you’re always a stranger. Even if you walk in a business 20 times, you’re still a stranger. In a town like this, I walk in. I don’t have to sign papers saying who I am. You don’t get that anywhere else.

“I grew up in Pennsylvania, and lived there 30 years, and it never felt like home,” he continued. “I felt at home in Iola.”

The community continues to lose a smidgeon of its population every year, like clockwork.

His family is no different.

Three of his four children moved away as soon as they finished high school.

“There’s no opportunity for them,” he said. “We’re building new schools, and a  new hospital, and it’s better for the community, but it still hasn’t done what needs to happen, to make Iola a more desirable place to live.”

Housing values have been stagnant for a generation.

Upon selling his property, Freimiller will have made enough to pay all of his bills, but he’ll get less than half of the total he spent in making physical improvements to his house and business.

He does his part in shouting from the rooftops what living in Allen County has meant to him.

But he also admits he doesn’t know the secret to get developers to invest in what southeast Kansas has to offer.

“Iola should be the land of opportunity,” he said. “The world needs to know that, and people will come. You can start businesses here, you can do things here. The administration of the city will allow you to, and will help you. I can’t say anything bad about Iola, Kansas, and what it’s meant to me.”