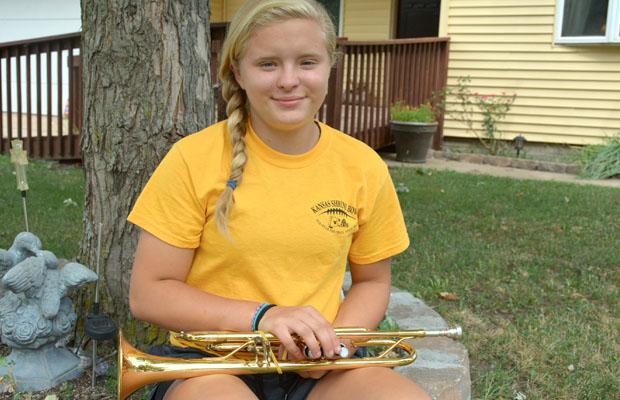 Kaylee Becker, 15, of Moran, enjoys helping people. She also likes to play the trumpet.
Combining those two things, she said, feels even better.
Sometimes you can find ways to do things you love that also helps other people, Becker said.
Becker performed in the Kansas Masonic All-State High School Marching Band Camp before the Shrine Bowl all-star football game July 28 at Pittsburg State University. Proceeds from the band camp are used for educational loans and grants and for the financial support of the Oncology Clinic at Kansas University Medical Center. Proceeds from the Shrine Bowl game benefit 22 Shriners Hospitals for Children across the country.
Becker learned about the band camp from her music teacher at Marmaton Valley High School, where shell be a sophomore. Shes played the trumpet since fifth grade and participates in the schools band as well as her church band.
Ive always thought its very moving for people to listen to music, she said. It helps me get through the day.
The band camp started July 24 and featured intense practice sessions each day. Becker considers herself a shy person, so at first it was difficult to open up in front of about 200 strangers. Eventually, though, she got to know the other participants, especially the trumpet players.
During the camp, participants split into groups of about 20 to meet with some of the Shriners Hospital patients, who explained what brought them to Shriners and how the donations raised by the Kansas event would help children like them, regardless of a familys ability to pay. The stories touched Becker, who hopes to find ways she can organize some sort of local fundraiser in the future.
During the Shrine Bowl, the band stopped playing for a short time to perform a dance number. Becker was able to overcome her shyness to dance in front of a crowd of thousands.
The whole crowd was screaming. It was very exciting, she said.
Becker plans to apply for next years camp. She wants to encourage others to take part or donate to the Shriners Hospital.
I think people should get involved, she said. Not only does (the camp) help you learn to play more efficiently, but its a great experience and it helps people.