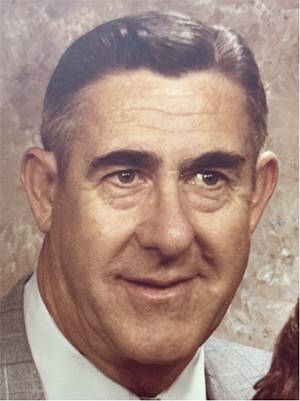 Jimmie J. Stanley, born and raised near Moran, died on Dec. 17, 2018, in Prescott, Arizona, after a long struggle with Alzheimers disease. He was 90.

Jimmie, the oldest son of Fred and Edith Stanley, attended the one-room schoolhouse at Elsmore. He enjoyed hunting and fishing as a kid and played football in high school. He graduated from Moran High School in 1946 and enlisted in the Air Force (then known as the U.S. Army Air Forces) that summer.

In 1953, he married Jeannie Daugherty of Wichita. They celebrated their 65th wedding anniversary last year.

During his 22 years in the Air Force, Jimmie was stationed around the world  from Japan to Greenland to England  as well as at bases throughout the United States. For many years he served as a flight instructor.

After his retirement from the Air Force, Jimmie became a corporate pilot for Halliburton Company, then based in Duncan, Okla. He retired from Halliburton in 1994 and moved to Prescott, Ariz., where he took up hiking.

Jimmie was meticulous in all he did, and took pride in keeping his house, yard and vehicles spotless and in excellent condition. Despite a lifetime of accomplishment, he was a modest and unassuming man who preferred a quiet day at home with his family to a night out on the town.

Jimmie is survived by his wife, Jeannie, of Prescott, Ariz.; his son, John, and his wife, Betty, of Phoenix, Ariz.; and his daughter, Judy, of Prescott Valley, Ariz. He is also survived by his brother, Carl, and his wife, Mary Ellen, of Iola; four nieces, Carla Jo Hunt and Ken of Iola, Connie Rourk of Iola, Paula Wachholtz and Neal of Papillion, Neb., and Vickie Weilert and Tim of Chanute; one nephew, Steve Stanley, of Iola; and a slew of grand-nieces and nephews.

The Stanley family will greet friends and relatives from 1 to 2 p.m. on Thursday, Jan. 3, 2019, with a funeral service at 2 p.m., all being held at Feuerborn Family Funeral Service, 1883 US Highway 54, Iola.  Burial with military honors will follow in the Moran Cemetery.

In lieu of flowers, the family requests a donation to the Disabled American Veterans.

Condolences may be left at www.feuerbornfuneral.com.