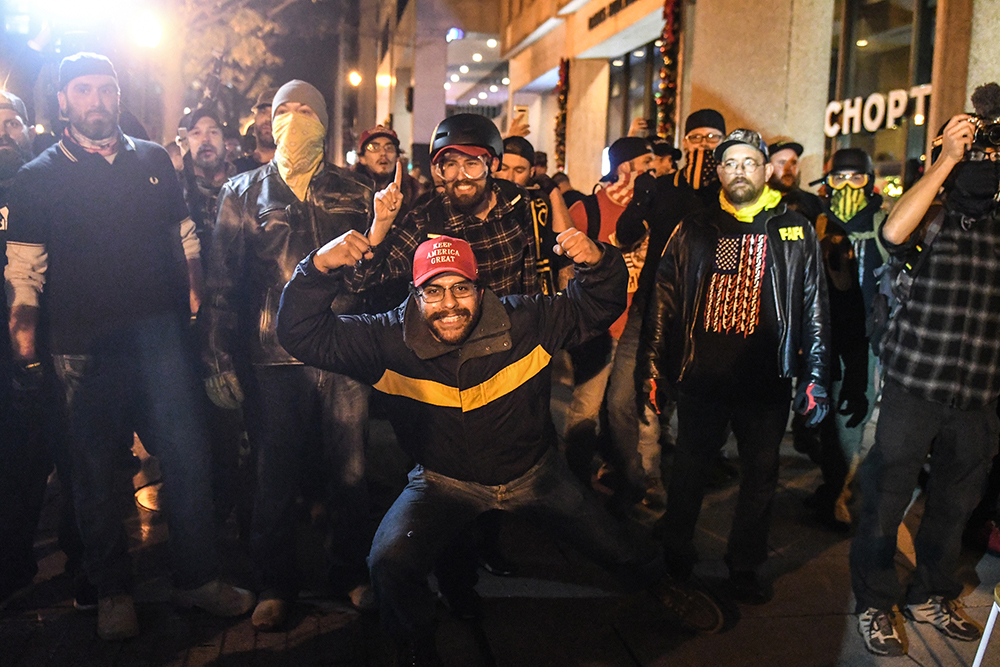 What should be a routine day of Congress approving the results of the Electoral College, may turn into mayhem if the president has his way.

Members of the Proud Boys pose for a photo during a protest on December 12, in Washington, D.C. Thousands of protesters who refuse to accept that President-elect Joe Biden won the election rallied ahead of the Electoral College vote to make Trump's 306-to-232 loss official. Trump is asking for such protestors to meet again on Jan. 6, when Congress meets to approve the election results. Photo by (Stephanie Keith/Getty Images/TNS)

Jan. 6, the day on which Congress meets in a joint session to accept the results of the presidential election, should be a testament to America’s enduring democracy. Yet it may become a demonstration of its poor health. President Trump, along with craven enablers like Sen. Josh Hawley (R-Mo), is seeking to upend what should be solemn but largely perfunctory proceedings to ratify the victory of President-elect Joe Biden. The result could be a shameless show of support by numerous congressional Republicans for erasing the votes of millions of Americans — and, perhaps, mayhem incited by the president in the streets of D.C.

“Big protest in D.C. on January 6th. Be there, will be wild!,” Mr. Trump tweeted earlier this month in an appeal to his supporters to come to the capital to buttress his campaign to overturn the election results. He followed up Sunday, “See you in Washington, DC, on January 6th. Don’t miss it. Information to follow!” And again on Wednesday, “JANUARY SIXTH, SEE YOU IN DC!”

That the president is actively seeking to incite street protests is a matter of more than a little concern to D.C. officials who — based on the behavior of some of Mr. Trump’s supporters at two previous rallies — fear there could be violence. While daytime demonstrations were largely peaceful on Nov. 14 and Dec. 12, destruction and bloodshed broke out when night came. During the Dec. 12 event, four people were stabbed and members of the Proud Boys — a far-right group linked to white supremacy and categorized by the FBI as an extremist organization — were seen roaming the streets and assaulting bystanders. Black Lives Matter banners belonging to Black churches were torn down, and the leader of the Proud Boys proudly claimed responsibility for burning one of the banners.

Editorials
Much as Trump tries to obstruct Jan. 6 inquiry, SCOTUS won’t play along
Columnists
Jan. 6 uprising may have set the stage for worse
Editorials
Committee must hold Bannon accountable
Columnists
McConnell could avert another Jan. 6