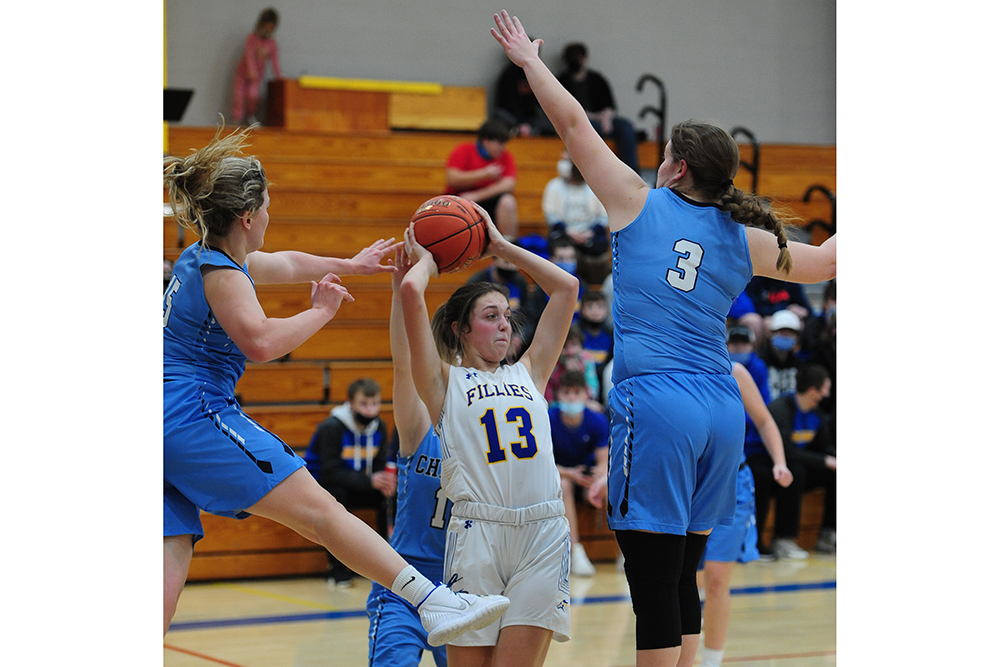 Iola came oh-so-close to upending rival Chanute for its first win of the season Friday. Alas, some costly turnovers and a healthy supply of Blue Comet free throws did in the Fillies in a 40-33 loss.

But Iola’s 40-33 loss to visiting Chanute gave a rambunctious IHS gymnasium plenty of entertainment value, and a glimmer of hope that a brighter future awaits the Fillies as they enter the second half of the season.

“It’s tough not being disappointed about a loss like that, but we can learn from this,” Fillies head coach Kelsey Larson said. “There were things we talked about going into the game: limiting turnovers, defending shots, boxing out. Tonight was the first game where I really feel like we put it together.”

Winless Iola held a four-point lead over the 8-2 Blue Comets headed into the fourth quarter before things went south for the home team.

Chanute scored the first six points of the final frame to take a 27-25 lead less than 2 minutes into the period.

The Fillies’ Lauryn Holloway knotted the score at 27-27 with a jumper from the free throw line, with 5:50 remaining.

But a 4 1/2 minute dry spell, fueled by missed shots and turnovers against the strapping Blue Comet press put Iola behind the 8-ball down the stretch.

Iola missed a pair of shots and committed a turnover across the next 2 minutes before Chanute’s Brinley Bancroft got loose inside for a bucket putting the lead at 30-27. Another Fillies turnover led to a pair of free throws from Kori Babcock, and suddenly, Chanute had its biggest lead of the game, 32-27.

The teams traded turnovers before Iola sophomore Aysha Houk drilled a 3-pointer to slice the deficit to two.

But with 56 seconds left, Iola’s Sidney Shelby was called for a foul on Tyra Bogle’s 3-point attempt, much to the chagrin of the home crowd. (The ref didn’t blow his whistle until the ball had bounced off the rim and the teams were preparing for the rebound.)

Bogle hit all three charities — a common thread, it turned out — to re-establish a five-point lead.

Babcock then followed another Fillies turnover with a free throw, putting the margin at 36-30 with 47 seconds remaining.

The teams traded turnovers on their next possessions before Iola’s Hannah Gardner drilled her second 3-pointer of the night to cut the gap to 36-33 with 28 seconds left. “Hannah hit some huge shots for us,” Johnson said. “She’s getting the confidence to take those shots.”

Babcock sandwiched two pairs of free throws around a missed trey from Gardner in the waning seconds for the final margin.

Both teams were primed and ready from the start in a low-scoring but nevertheless entertaining first half.

Babcock’s field goal to open the scoring prompted a 30-second time out from the Blue Comets to honor the standout senior’s 1,000th career point.

Iola’s Becca Sprague scored twice for the Fillies and a Gardner trey put Iola up 7-4. Chanute responded with two straight buckets before Kailey Schinstock scored to give the Fillies a 9-8 lead after the first quarter.

The second quarter was just as hard fought. Houk’s trey with 3:17 left ended Iola’s five-minute scoring drought to knot the score at 12-12. Sprague’s bucket with 1:25 left in the half put the Fillies within 15-14.

The electricity in the crowd began building substantially in a back-and-forth third quarter.

Houk’s runner early in the frame knotted the score at 16-16 before Sprague scored on a putback to give the Fillies an 18-16 lead. Payton Shields tied it for Chanute, leading to Sage Barney’s jumper from just inside the 3-point line for Iola to push the Fillies on top, 20-18.

Barney was pressed into action because of early foul trouble among Iola’s guards — more on that later — and her shot brought the home fans to a state of delirium.

“Sage has been working so hard in practice,” Johnson said. “She gets a little nervous, but once she gets settled in, she’s going to be very good.”

Brianna Waggoner connected from 3-point range late in the quarter to give the Blue Comets a 21-20 lead.

Sprague put Iola back on top when she scored with 30 seconds left.

Chanute misfired at the other end, and Houk ended the frame with a 3-pointer, putting Iola on top 25-21.

“It’s fun watching her mature,” Johnson said of Houk. “Defense is where she struggled, but she’s really been locked in the last couple of days in practice. She knows that’s what she needs to get herself on the court, and she did it tonight.”

FOUL trouble was a common thread through the night. Both Gardner and reserve Josie Plumlee were saddled with three fouls in the first half, sending them to the bench for extended periods.

By night’s end, Iola was whistled for 24 fouls, compared to Chanute’s nine.

The Blue Comets were a staggering 19 of 32 from the line.

Iola didn’t have a single attempt.

“I hate complaining about fouls,” Johnson said, acknowledging Iola’s players were rightfully whistled for fouls when they were called. “But it’s hard when it’s 10 to 3 with fouls” in a game that was physical at both ends of the court.

Still, the sense of excitement from the appreciative fans gave the team a lift. Friday’s tilt was the first one since the state loosened attendance restrictions. The gymnasium was not at capacity, but the decibel level was palpable.

“We talked about it in the locker room,” Johnson said. “It was way louder in here than it has been, and we were able to feed on that energy.”

Houk’s 11 points led Iola, followed by Sprague with 10 and Gardner with six. Babcock was 9 of 10 from the line in the fourth quarter to wind up with 17 points to lead the Blue Comets.

Jenna Curry’s bucket with 30 seconds left gave the Iola JV a 32-31 victory in a game that featured three lead changes in the last 90 seconds.

Maci Miller’s 3-pointer had given Iola a 30-28 lead before Chanute’s Kelsey Haviland responded with a trey 10 seconds later to put Chanute back on top.

That led to Curry’s bucket from underneath putting the Fillies ahead..

The Blue Comets held the ball for the final shot, but a 3-point attempt swirled around the rim and bounced out as the buzzer sounded.

THE Fillies won’t have long to dwell on Friday’s near miss.

They’re back in action this afternoon in a makeup game against Prairie View. The Fillies’ seventh game over 11 days — with plenty more to come over the next four weeks.

“That’s what I’m telling the girls,” Johnson said. “Yes, we’re 0-9 now, but we have so many games left, and they’re making improvements.”