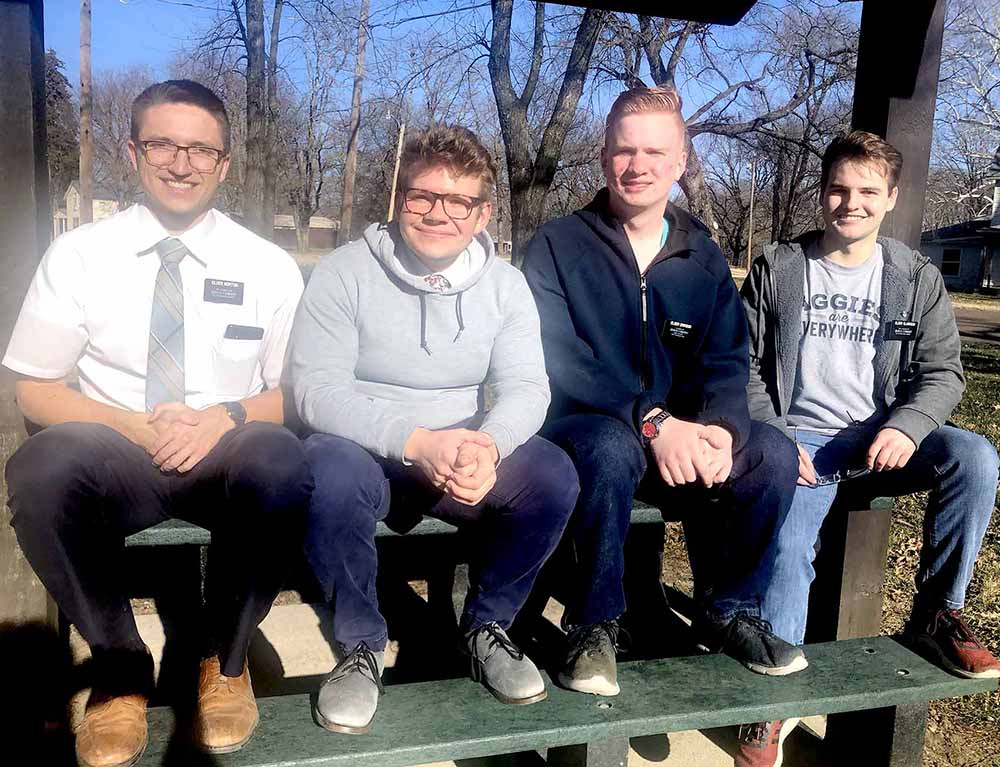 A Christmas mission: Missionaries move online to find new ways to serve others

Four men turned to social media to find projects in Allen County, as they are serving a mission here during a very COVID Christmas.

Any other year, they’d be wearing suits and carrying Bibles. Walking around neighborhoods and knocking on doors. Asking to talk to you about Jesus Christ.

This year, they’re wearing jeans and T-shirts, carrying hammers and paint brushes. Scouring social media and posting on Facebook. Asking how to help others in the name of Jesus.

Four young men are serving in Iola as part of a rotating group of missionaries with The Church of Jesus Christ of Latter-day Saints.

They’ve had quite an unusual year — and quite an unusual mission — because of the coronavirus pandemic. Two of them were pulled out of foreign countries when the pandemic began and countries closed their borders. Their time in Iola ranges from a few weeks to a few months.

On Friday, they’ll celebrate a quite unusual Christmas, too, far from their families in an unfamiliar place, during an unprecedented time of sacrifice and strife.

Well, maybe not so unprecedented.

“Our Savior Jesus Christ made sacrifices to do the willof his father, so I would say putting away what I might want in order to do this good work is pretty miraculous, especially in the year of COVID,” said Trent Clarkson of Kanab, Utah. He’s been serving in his mission for 10 months and has been in Iola for a month.

“I’m incredibly grateful for the opportunity to make that sacrifice.”

Zach Norton of Morristown, N.J., has been serving his mission for 21 months and has been in Iola four months.

“Our biggest goal is trying to help others like He would.”

New to the mission is Peter Erikson of Rexburg, Idaho, who entered the mission four months ago and has spent most of that time in Iola.

“The last few months has really helped me think more about Christ and what he did for all of us. Just as we aren’t with our families and we aren’t doing the commercialized side of Christmas, we’re focused solely on Christ.”

Mason Clark of Middleton, Idaho, has been on a mission for 23 months and has been in Iola almost four months. The pandemic will keep many families separated this Christmas, but he hopes people will find ways to make the best of an unusual time.

“If you are looking for joy and happiness and hope this Christmas, you are going to find it,” he said. “You have to make the best of it. Those that don’t have an opportunity to see their families can still do so in weird ways, like Zoom or Facetime.

“If you want your Christmas to be more centered on family and Christ, this is a good year to make it so.”

WITH THE pandemic limiting opportunities to do mission work as usual, Clark decided to take advantage of technology.

He joined various online groups, reaching out to others across the world.

“I really like how we can have a bigger influence. As a missionary, you can only talk to so many people a day. But now that everyone is online, you can be in a Facebook group with a million people and a small little thing can have a big impact.”

His embrace of technology is somewhat ironic. When the pandemic began, he was serving a mission in West Africa, where he had little access to anyone outside his mission.

“I was put in this little bubble. There wasn’t a lot of technology. When I left, they gave me a cell phone and said, ‘Do Facebook.’ I hadn’t been on Facebook in a year. I didn’t even remember my password.”

Clark’s mission in West Africa abruptly ended in late March, when he learned he needed to immediately return to the United States. Countries were closing their borders because of the coronavirus pandemic.

He’d never heard of it.

He returned to LAX airport in Los Angeles, surrounded by strangers wearing masks. No one would shake his hand.

“I was really confused.”

Norton had a similar experience on his mission in Brazil, where he’d been serving for about a year. He spent his days walking the streets with other missionaries, talking to people about Christ.

A church leader told him the borders would soon close, and he needed to return to the U.S. within three days. He returned home March 26. On May 6, he started a new mission that would bring him to Iola.

“We got used to a certain way of working, and that got cut off because of COVID,” Norton said. “It’s been an adventure learning how to serve Christ in this time. Sometimes we forget how far a simple message can go.”

It’s difficult to ask missionaries to confine themselves to home, Clarkson added. His mission began in Independence, Mo., just a week before COVID lockdowns began.

The lockdown restrictions imposed early in the pandemic and this past summer made it challenging to go out into the community and talk to others.

“A lot of what we were doing was trying to figure out how we can continue to do our job,” he said. “How do we help others in this new situation? How do we find hope?”

Once their paths all converged in Iola, the men knew they needed to take a new approach.

They started spreading the word, asking around town for anyone who needed help with something. Anything.

They started helping Silverio Garcia, who owns the former Elsmore school and hopes to renovate it for a retreat for veterans. Every Tuesday, they perform various “hard labor” tasks for him, such as moving heavy railroad ties or busting up concrete.

As the summer wound down, opportunities to help became scarce.

Clark decided to go online to find more ways to serve. He started small, by joining Facebook groups led by other missionaries. Then he joined various local groups, including those where people buy and sell items, and started posting messages.

“I’ve got a group of guys and gals fixing to help others this Christmas season and beyond! Let me know if you or someone you know needs help!”

“My phone has been blowing up,” Mason said.

“The response has been amazing,” Clarkson added.

Erikson, who is the newest to mission work, said he was excited for the opportunity to serve. He saw how other relatives had grown and matured through their experiences and was looking forward to his time.

His mission began in the midst of the pandemic. He originally was called to a mission in Brazil, but because of international travel restrictions, he was reassigned to Iola.

“I’ve been thinking about how different it is for my mission, and I feel like this is the perfect mission for this time,” he said. “We’re cut off from people in a lot of ways, but we’re also more connected online than we’ve ever been. We’re able to find people we never would have found otherwise.

“It’s been a really good experience for me. I’ve been able to connect with God in a more personal way.”