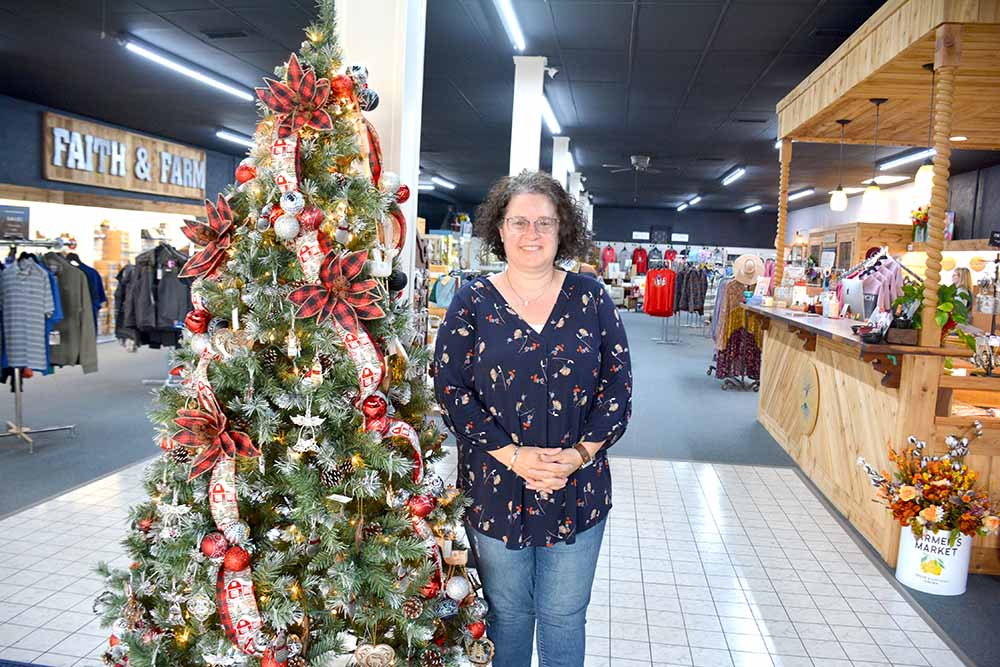 Downtown in the spirit

Faith and Farm Designs owner Shana Forsyth is ready for the Annual Christmas Block Party on Friday. Downtown businesses will offer discounts and prizes. There’s plenty of inventory, even as supply chain issues have made it difficult to get some products. Photo by Vickie Moss / Iola Register

And they’ll have plenty of inventory to help you find the perfect Christmas gift, even as supply chain issues have disrupted business in some ways.

ABOUT 18 businesses will take part in the Annual Christmas Block Party from 4 to 7 p.m. Friday.

The event is sponsored by the Iola Area Chamber of Commerce. Businesses will offer various discounts. Visit each location with a special card, get it punched and enter a prize drawing for more than $250 in prizes. Some businesses will have special drawings of their own, as well.

Audacious Boutique, at 19 S. Jefferson, has taken part in the Christmas block party since it began more than 10 years ago as a joint effort by several downtown businesses.

Owner Kelly Sigg said the event has special meaning this year, as it will be the first Christmas for Audacious in a new location, and after the pandemic dampened holiday events last year.

It’s also one of numerous community events Audacious has planned for the holiday season, including a sweater exchange to donate to Hope Unlimited, a canned food drive and more.

“People support us all year long, and we are proud to be part of this community,” Sigg said.

She believes the past year brought a greater appreciation for local businesses.

“People are more aware and conscious of how important it is to buy local. I hear that more and more,” she said. “It’s that kind of attitude and belief that will keep our small town going.”

SUPPLY chain issues have disrupted the holiday season for some businesses.

A handful of those who spoke to the Register this week said they’ve seen delays on products.

Still, they said, inventory is available and customers typically understand when they face shortages.

Boots, for example, are hard to come by anywhere you go, Shana Forsyth, owner of Faith and Farm Designs at 101 E. Madison, said. Boots are produced in the U.S., but the supplies come from overseas. That means boot-making companies have trouble getting the supplies they need; others say they don’t have enough staff in their warehouses to quickly fill orders.

And it’s not just boots. They’ve seen delays from all vendors.

“Getting merchandise has been difficult. It’s been a big problem for us this entire year,” Forsyth said.

“Other than that, business has been fine. People are still coming in. But they aren’t seeing a lot of new merchandise.”

Audacious hasn’t had those same problems, Sigg said, mostly because she’s been able to return to large, in-person, conference-style shopping markets. She’s able to speak directly to vendors and other business owners to find which suppliers have stock available.

She’s had to become more aggressive in her buying practices.

“I had to beat the bushes harder,” she said.

Even then, she’s faced shipping delays. She’s also learning how much inventory it will take to fill her new, larger building.

“I feel like I’m starting over. It’s not apples to apples when you compare it to last year, but it’s been a good year.”

AT JONES Jewelry, 5 N. Jefferson, owner JoAnn Butler said she hasn’t been having too much trouble getting inventory.

Some special products, though, are harder to come by. For example, gold solder, which is used in jewelry repair, has been put on backorder. Butler doesn’t know how long it might take to receive an order.

The pandemic has been difficult on her business, and she hasn’t seen much of a return to pre-pandemic shopping habits.

“It’s unusual, but the whole world is unusual,” she said.

Still, jewelry shopping tends to be more of a last-minute thing when it comes to Christmas, she said. And couples are still getting engaged or married, so they’re buying rings.

Across the square at Capper Jewelry, 4 N. Washington, Carla Capper also sees plenty of shoppers who are interested in engagement or wedding rings.

“And people aren’t traveling as much but they still want to celebrate. So instead of doing it with a trip, they’re buying jewelry,” she said.

For the most part, Capper isn’t having much trouble getting regular inventory items.

But it’s a different story when it comes to special orders, including personalized items. Those companies seem to be facing labor shortages, and it takes quite a while to receive orders.

Most years, she said, the cutoff date for special Christmas orders is Dec. 12. This year, it’s already too late.

The supply chain issues have forced prices to increase, as well.

In general, though, Capper said business has been going well.

“We’ve been around long enough, we knew we had to tighten our belts. Our bills are paid and I’m happy,” she said. “We’ve got one of the better jobs. Almost all of the people who come in are happy. They’re celebrating something.”