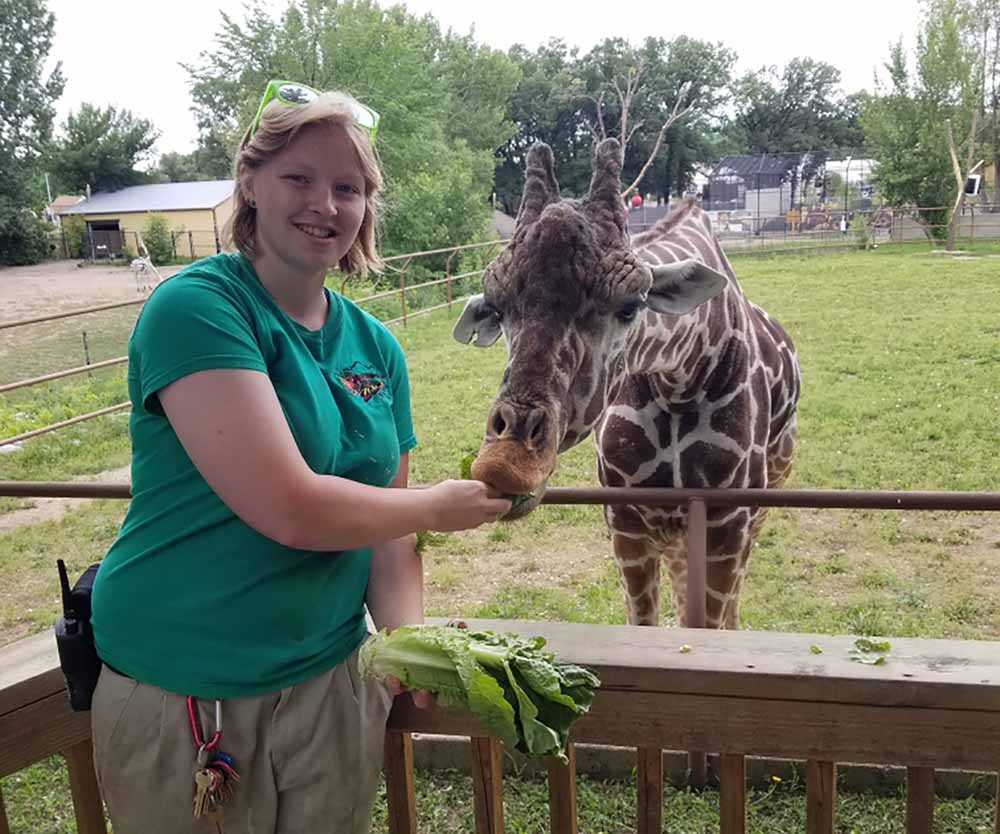 It’s a zoo out there for IHS alum

2015 Iola High School graduate looks after animals at North Dakota zoological gardens. The COVID-19 pandemic has closed the zoo to the public.

Baleigh Seeber poses for a photo with a giraffe at the Roosevelt Park Zoo in Minot, N.D. Courtesy photo

The otters are playful; the wolves a bit more skittish.

Of course, there are the farm animals; sheep, cattle, goats, etc.

And then there are the more unique species she looks after, the okapi, a cloven animal that carries stripes like a zebra but looks more like a giraffe.

There’s not really a favorite, she admits: “I love them all.”

Seeber, a 2015 Iola High School graduate, has worked for the past year at Roosevelt Park Zoo, one of North Dakota’s pre-eminent zoological gardens, on the outskirts of Minot.

She spoke with the Register about targeting her dream job, staying in touch with family nearly 1,000 miles away from home, and dealing with the ongoing COVID-19 pandemic, which has idled public gathering points, such as zoos, across the country.

SEEBER, daughter of Janna Stotler and Ron Seeber, grew up in Iola with dreams of working with animals.

She originally considered a career as a veterinarian, but soon reshaped her focus after learning more about zoo science. Seeber earned a zoo science degree at Friends University in Wichita which included an internship at the Tanganyika Wildlife Park in Goddard. She also worked briefly at the Sedgwick County Zoo.

Eager to get her career off the ground, Seeber was in the middle of her college finals when a  zookeeper position at Roosevelt Park opened up.

She landed the job and moved to North Dakota that summer of 2019.

The drive leaves a bit to be desired. “Sixteen hours,” Seeber moaned. Her traveling companion, Andy, is a 57-pound black lab she’s had for years.

North Dakota carries its appeal. The folks are friendly, and the landscape is nice.

The winters are longer, though. “The natives called it a ‘nice cold,’” Seeber laughed, referring to minus 20.

SEEBER’S duties include working with many of Roosevelt Park’s farm animals, as well as those found in northern climates, such as the zoo’s pack of wolves and a rescued bobcat.

On top of regular feedings, Seeber also periodically cleans the animals’ living areas when the zoo is closed.

In all, she’s responsible for oversight of 30 animals.

On the public side, Seeber becomes an educator, sharing her knowledge about the animals, where they live, and how humans can help those animal populations.

“It’s all about education,” she said. “It’s important to explain to people why these animals need to be protected.”

Some of the animals are endangered species. The black-footed ferret, for example, had been considered extinct at one point until being upgraded to “endangered” in the 1990s.

WATCHING the otters is fun, she admits.

“They all have their own personalities,” she said. “I’ll watch them swim.”

Safety remains a top priority. The zookeepers work in tandem to ensure they aren’t harmed by a skittish animal.

The wolves, for example, are cordoned off while the zookeepers clean their living area.

“They’re more scared of us than we are of them,” she notes. “And they aren’t overly friendly, anyway.”

UNTIL THE park reopens — tentatively scheduled for April 30 — Seeber has joined the other Roosevelt Park staffers in filming educational videos about the animals. She’s been featured on two such videos shared on the zoo’s Facebook page.

And then there’s the deep cleaning, to ensure a safe environment, both for the animals and people.

“We’re doing our best to get things ready,” she said.

SEEBER, 22, enjoys North Dakota, and working at Roosevelt Park has met every expectation.

Still, there’s a yearning to eventually work closer to her native Iola. The 16-hour drive leaves something to be desired, even with her furry sidekick.