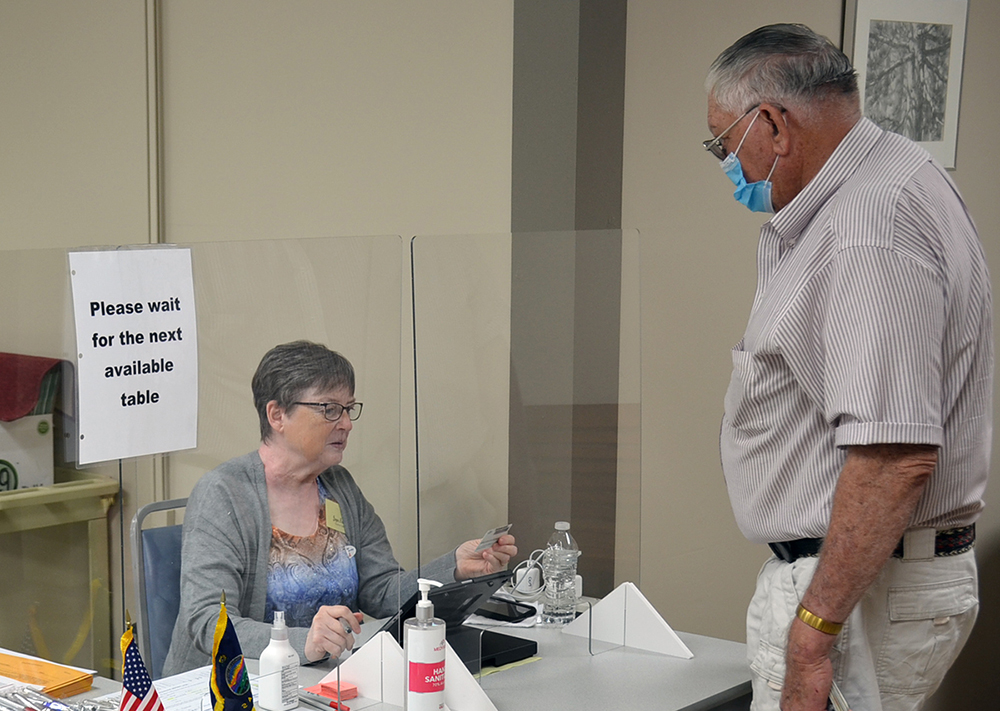 Voters across the state can begin casting their ballots in advance of the Aug. 4 primary election. In Allen County, a polling place has been set up in the courthouse basement.

Several accommodations are in place for Allen Countians seeking to vote in the Aug. 4 primary election — or sooner, if they so choose.

Advance voting began Wednesday at the courthouse, while Allen County Clerk Sherrie Riebel said her office was in the process of mailing out 447 ballots for voters who requested the vote-by-mail option.

“That’s probably high for us right now,” Riebel said. “Statewide, the demand (for mail-in ballots) is very high this year.”

The courthouse basement assembly room has been set up as an advance voting station up until election day.

Riebel noted the spacious environs allow voters to easily social distance while they wait to cast their ballots.

Those wishing to vote by mail must submit an application to the county clerk’s office “ASAP,” Riebel said. Ballots can be mailed out to voters no later than 3:30 p.m. July 28.

Mailed ballots must  either be returned to the county clerk’s office or dropped in the mail by Aug. 4, or they can be left at any of the four listed polling places in Allen County on election day: Iola’s John Silas Bass North Community Center, 505 N. Buckeye St.; Humboldt Methodist Church, 806 N. Ninth St.; the Gas Community Center, 624 W. Pine St.; and Moran Senior/Community Center, 407 N. Cedar St.

SEVERAL races, both at the county and state level, will be decided in the primary.

On the Republican side, Allen County Sheriff Bryan Murphy is being challenged by County Commissioner Jerry Daniels. There is no Democratic representation on the ballot, meaning the victor in the primary is a virtual lock to win election in November.

Two Allen County Commission seats are up for grabs.

For District 2, which covers much of northern Allen County, including LaHarpe and Gas, David Lee, Craig Mentzer and Eugene Weatherbie are vying to replace Bill King, who is not running for re-election. The winner will face Democrat Michelle Meiwes in November.

For District 3, which covers much of Iola, Commissioner Bruce Symes is being challenged by former Commissioner John Brocker. The winner will face no challenger on the Democratic side.

Only registered Republicans and Democrats can vote for candidates in the primary election. Those registered as independents or other political affiliation will largely be out of the loop until November.

ALL ALLEN Countians, regardless of their political party, will be able to cast votes regarding extending funding for Allen County Regional Hospital.

The county’s quarter-cent sales tax authority expires this year. Proceeds are used to finance operations at the hospital. If extended, the tax is projected to bring in about $598,000 annually.

STATE and federal offices also are up for grabs.

Rep. Kent Thompson is being challenged for his Kansas House of Representatives seat by Armondo Hernandez, Chanute. The winner will advance to face Humboldt’s Alana Cloutier from the Democratic side in November.

Kenneth Collins, who represents eastern Allen County in the Kansas House, is unchallenged in the primary, but will face Democrat Lynn Grant in the general election.

Rep. Steve Watkins is being challenged by State Treasurer Jake LaTurner and Dennis Taylor  of Topeka on the Republican side. Topeka Mayor Michelle De La Isla is facing James K. Windholz in the Democratic primary.

State Sen. Caryn Tyson faces no opposition in the Republican primary to keep her seat. She’ll be challenged by Democrat Mike Bruner of Humboldt  in November.