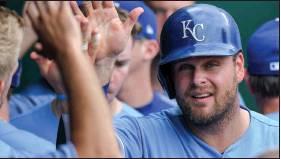 Royals send 1B Duda to Braves

Duda signed a $3.5 million, one-year deal to take over for departed first baseman Eric Hosmer this season. But despite showing flashes of his prodigious power, Dudas hit just .242 with 13 homers and 48 RBIs while appeared in 87 games, making his trade somewhat imminent.