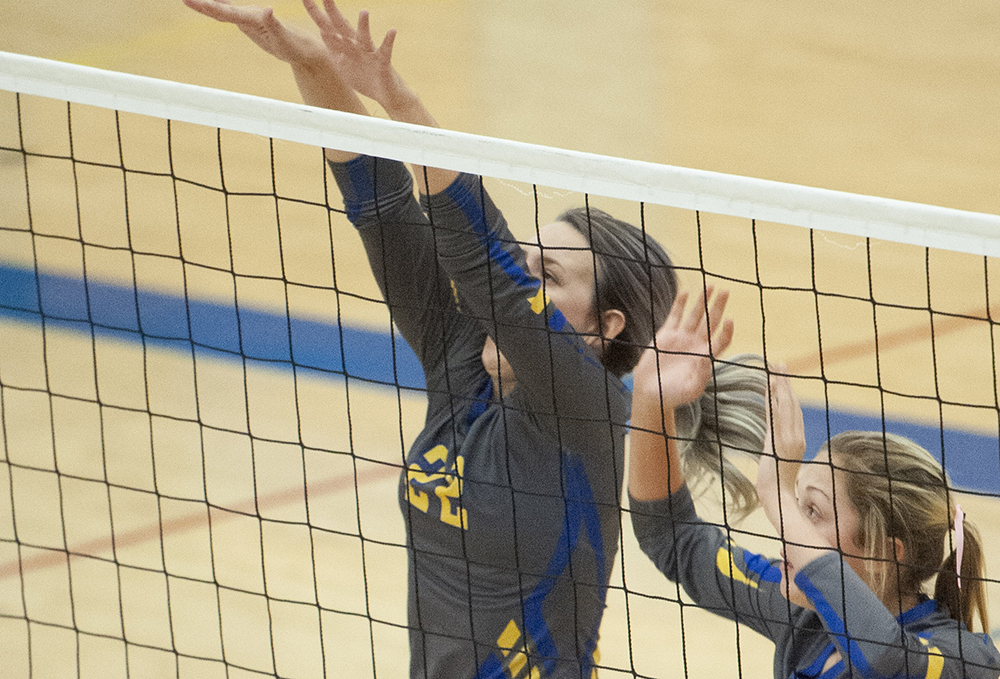 Biggest rule changes headed to volleyball arena, where attendance will be limited and fans required to sit in designated areas while wearing masks.

Jocelyn Erbert, left, and Lauryn Holloway go up for a block against Prairie View in a 2019 match for Iola High School. Register file photo

It’s been a long time coming — nearly six months, to be precise — since most Kansas high school athletes have been permitted to compete in front of crowds.

So when the fall sports scene hits high gear in the coming days, the setting will be a bit different from what most spectators are accustomed to seeing.

For Iola High School and Iola Middle School, the biggest changes will come in the volleyball arena, where attendance will be limited, and fans will be required to sit in designated areas while wearing protective masks at all times.

The new rules were handed down by the Pioneer League’s Board of Directors and approved by Iola’s USD 257 Board of Education.

Among the new guidelines:

Each volleyball player can distribute up to four game passes to friends or family members, explained Jason Coke, assistant principal and athletic director at the middle school.

The passes are non-transferrable, Coke said. Once they’ve been handed out, they cannot then be given to someone else.

The reason being, Coke said, is to better track who is seated in specific areas in case somebody at the match later tests positive for COVID-19.

To contain crowd sizes, tickets will not be sold to the general public.

As an aside, siblings will not be required to have a separate pass, Coke said.

It’s also important to note the passes simply allow the holder to buy a ticket. (In other words, it’s not a free pass.)

Temperature checks will be done at the gate as well, Coke added.

Once inside, there will be no designated student seating section. And junior varsity or B and C team players will not cluster inside the gym when their teams are not competing.

Rather, they’ll likely wait in a designated area — a classroom or commons area, for example — until it’s time for them to come in for their matches. Coke said the district is working on ways to have the matches live streamed, so the players can watch, and for others to follow.

Locker rooms will be used only in case of emergency, Coke said. That means players must already be in uniform when they arrive at the venue.

All coaches and players seated on the sidelines will be required to wear masks.

One last nuance unique to volleyball: teams will no longer switch benches halfway through their respective matches. Accordingly, fans will not move en masse from one section of the gymnasium to another.

That could create a scenario, Coke said, in which fans are rooting for their respective teams from a distance if and when the team plays on different courts.

Attendance won’t be limited at Iola High School football games at Riverside Park, but spectators must still wear masks when they arrive, because they’ll have to travel through the stadium’s inner concourse, which is anything but spacious.

The schools are looking at adding bleachers around the field to allow the crowd to spread out further, Coke said.

Port-a-potties will be brought in on game days, and the crowd will be encouraged to visit the concession stand at times other than halftime, when lines are longest.

Likewise, Coke said the schools are looking at setting up additional concessions areas to relieve overcrowding.

“The idea with all these rules and regulations is to give these kids a season,” Coke said.

AS FOR the concession sales, the County Health Department is permitting — for now — the sale of items such as hot dogs, popcorn and nachos, provided they are prepared and packaged beforehand. “We’ll make it before games and sell out of the inventory we have,” Coke said.

Prepackaged items such as candy bars and potato chips also will be sold.

Players will come to the stadium already in their uniform bottoms and T-shirts, and can don their jerseys and shoulder pads after they arrive.

As with volleyball, football players will be encouraged to sit one to a seat when traveling on the bus to road games.

THE PANDEMIC also is affecting other fall sports.

Coke noted Iola was forced to find a new cross country meet instead of traveling to Garnett for its season-opener Thursday because of the number of schools planning to attend. (Iola now is headed to Prairie View Thursday.)

Iola also had to abandon its home meet — the Doc Stiles Invitational — because of the large crush of schools planning to attend.

Coke said league officials will monitor how fall sports go before determining what sort of safeguards will be put in place prior to the winter sports season when basketball and wrestling take center stage.

OTHER districts will not have the stringent safeguards in the place for volleyball.

A quick survey of Humboldt, Marmaton Valley and Crest schools revealed crowd sizes will not be limited.

Masks will be required to enter the gym at Humboldt. Marmaton Valley and Crest are encouraging spectators to wear masks, but have not made it a mandate.

ANOTHER offshoot of the coronavirus pandemic is how remote learning is affecting some schools.

Marmaton Valley High School’s football team — which already was thin on numbers — lost two potential players who opted to take classes remotely rather than attend school on campus this fall.

Other schools, such as Iola and Crest, still will allow students to compete in extra-curricular activities if they’re taking online-only classes.