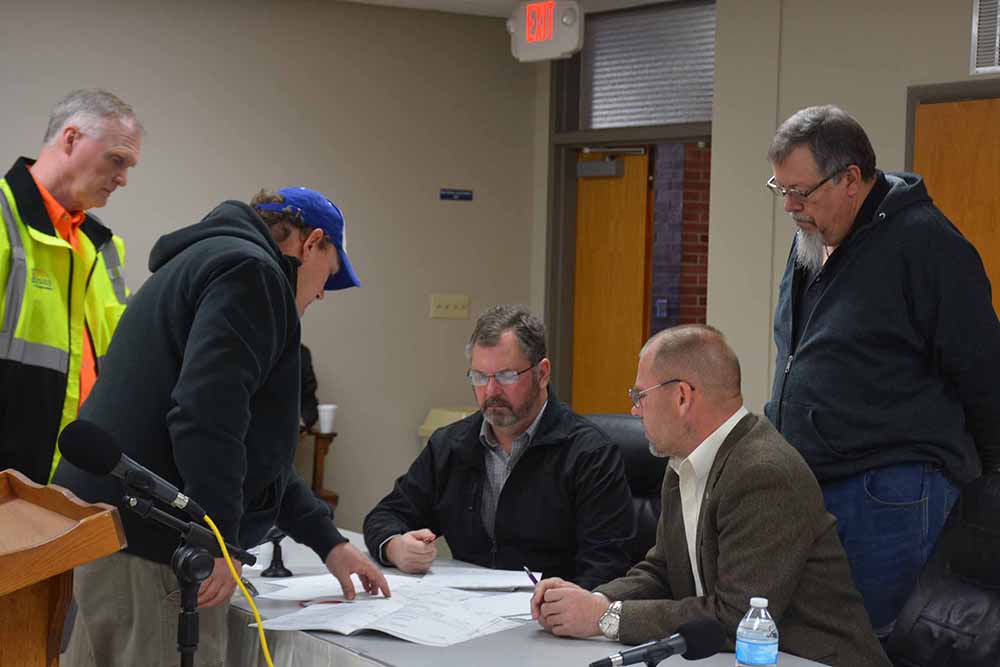 A highway improvement project between Humboldt and Chanute should affect Allen County traffic from late July to mid-November.

A highway improvement project between Humboldt and Chanute could cause a bit of a traffic headache for local industries and businesses, but it shouldn’t take too long, county commissioners learned.

In highway construction terms, that means about six months.

Engineers from the Kansas Department of Transportation met with commissioners Tuesday morning to review the timeline and route for a construction project on U.S. 169.

Parts of the 13-mile improvement project in Neosho and Allen counties have been underway near Chanute for several months. A five-mile stretch from Chanute to Earlton opened in December, followed by the closing of three miles between K-39 and Plummer Avenue.

In late July, a section between Plummer and the Humboldt-Chanute Road will close including a section north to railroad overpass. That will complicate truck traffic to Humboldt industries, including Monarch Cement and B&W Trailer Hitches.

Commissioners have been concerned about the impact on those businesses, as well as others.

They believe trucks can use county roads, and have asked for a review of weight limits on bridges.

Commissioners said they weren’t as worried about the increase in truck traffic on those roads, but did have some concerns about the weight limits.

Construction crews have a financial incentive of about a half million dollars to complete the work early, they said.

“These guys are banking on that incentive,” Gudmonson said. “They aren’t messing around.” The highway must be opened to unrestricted traffic in mid-November, so it will be open by Thanksgiving.

The engineers also talked about other area highway projects that could affect Allen County, including a repaving project from Yates Center to Iola this summer.

Thrive is administering the federal relief funds for the county. Goering said Thrive staff were reviewing the guidelines.

Commissioner Bruce Symes asked Goering to provide an updated spreadsheet and report so commissioners could take stock of where things stand. They want to know how much money has already been spent, what requests have been received, and which projects were requested by the county and other entities.

It’s important to set priorities so those entities can make plans and set timelines for their projects, Chairman Jerry Daniels said.

Commissioners discussed the possibility of giving either 4% or 5% cost-of-living adjustment for county employees.

Recent increases in inflation led them to increase the percent more than they had expected when they set the budget for 2022. Originally, the budget allowed for a 3% COLA.

But federal inflation rates are currently 5.9%.

Because of the higher wage rates, commissioners decided to forgo merit raises.

Daniels and Symes said they’d prefer to increase the wages by 5%, citing the need to stay competitive and invest in employees.

Commissioner David Lee said he wanted at least one week to review the numbers and consider the matter, but he was in favor of either 4% or 5%.

Daniels also raised the issue of using ARPA funds to provide additional pay for emergency workers during the early days of the COVID-19 pandemic.

Rules for using ARPA for that reason are very restrictive, Symes cautioned. Only about 25% of county employees would qualify.

Commissioners said they were in favor of determining some type of process to pay county workers, even if that meant the money must come from other budget sources. Using ARPA funds in other ways could make money available to do so.

“I hate to say it this way, but it’s like robbing Peter to pay Paul, and then paying Peter with ARPA,” Daniels said.

IN OTHER news, commissioners:

• Appointed Daniels as chairman during an annual reorganization. Bruce Symes had previously served as chairman.

• Heard from Jason Trego, emergency management director, who updated commissioners on the recent purchase of a used generator that will be made available during emergencies. The generator was larger than expected, and needed to be weighed to see if it could be pulled by the department’s Ford Explorer.

Daniels suggested Trego look into the possibility of trading the Explorer for a larger truck that not only could pull the generator but would allow the department greater flexibility of delivering supplies during an emergency.

Murphy said his department had a couple of trucks it was looking to trade, and one might be a good option.