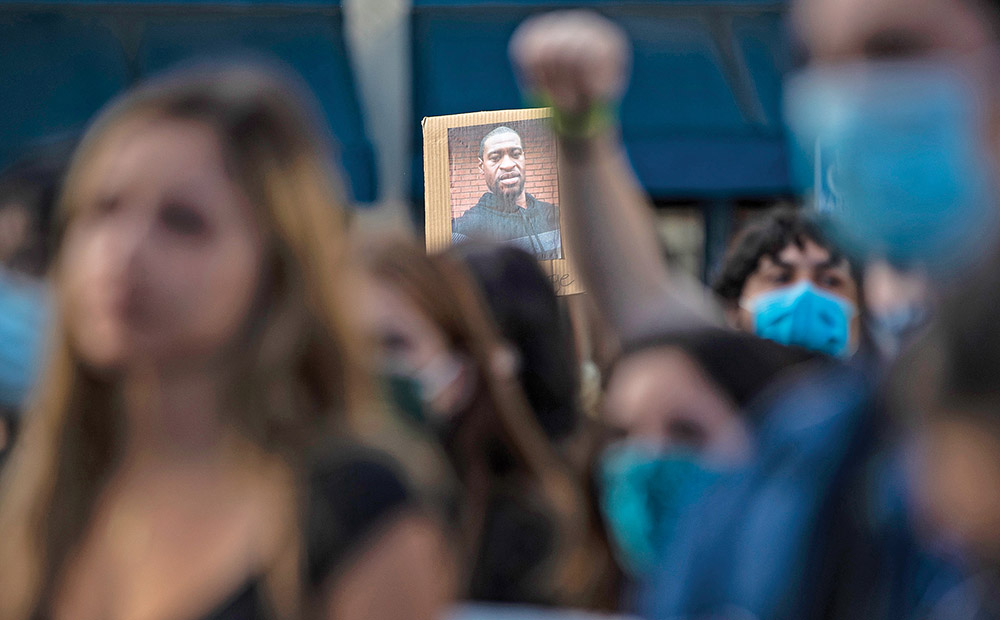 Don't let the looting and violence obscure the greater tragedy of systemic racism.

A photo of George Floyd is help up in the crowd during a demonstration protesting his death at the hands of Minneapolis police officers, on Saturday in Orange, Calif. Photo by Gina Ferazzi/Los Angeles Times/TNS

To President Donald Trump, this weekend’s protests were just a bunch of unhappy people “ranting” about who knows what.

All that “I can’t breathe,” and “Black Lives Matter” can get awfully tiresome. So. Much. Noise.

Mr. Trump’s initial reaction to demonstrators in Minneapolis, the site of George Floyd’s brutal murder by a police officer, was to refer to them as  “thugs.” After all, they smashed buildings, overturned cars and set things on fire.

Too late. Not that we needed further proof of the president’s racial biases.

Mr. Floyd was African American. The police officer, and the three other officers who did nothing to stop him from slowly asphyxiating Mr. Floyd, is white.

As blacks have been forced to do, death after death at the hands of white law enforcement officers.

On Saturday, the president said officers with the Secret Service were ready to turn their “most vicious dogs” and “most ominous weapons” on “the agitators” protesting outside the White House.

FORGIVE US, Mr. President, but this is not about you.

And instead of being a healer and a motivator, the president himself is  an agitator, feeding into the frenzy with antagonist rhetoric  — “when the looting starts, the shooting starts” — in an effort to rally his base.

What he fails to comprehend is the damage such incendiary and threatening remarks have on society as a whole.

Saying you have attack dogs and weaponry at the ready hearkens back to the police brutality of the 1960s race riots.

Recognize the racial inequalities that continue to plague the United States and specifically the systemic bias in our law enforcement communities and pledge reform.

Quiet calls for racial reconciliation are not enough.

We must demand action.

And yes we want anger, because Mr. Floyd’s murder was far, far worse than a tragedy. It was a travesty against everything law enforcement should represent. And if the judicial system turns a blind eye to his assailant’s prosecution, it will be another nail in the coffin to democracy.

Every American should feel a deep and rising anger about the growing injustices our minority populations continue to suffer.

We were never designed to be a “white nation,” and yet we allow minorities to be subjugated to inferior treatment, education and opportunities. In effect, we are condoning white supremacy.

To turn this ugly chapter, it starts with us demanding — angrily — systemic change.

And that would be beautiful.